How UCLA can become a playoff contender 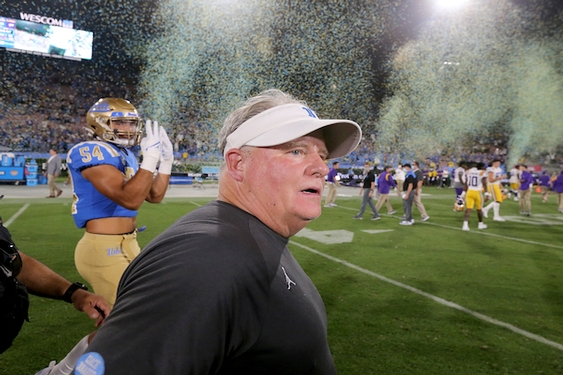 It’s the first Sunday of September, which means half the fan bases across college football can wake up and keep on dreaming, none more so than long-suffering UCLA diehards.

So, good morning, Bruins. Does the coffee taste better with Tiger tears? Is the bacon tastier seasoned with the false bravado of the Southeastern Conference?

UCLA’s 38-27 humbling of No. 16 Louisiana State wasn’t just a big win in Los Angeles. It was the biggest win for the Pac-12 since Oregon beat Florida State in the 2014-15 College Football Playoff semifinal played on that same pristine patch of grass in Pasadena at the Rose Bowl — and achieved maybe not coincidentally by a bunch of players recruited to their school by Chip Kelly.

This is all to say that eight-clappers should feel no hesitation on this fine morning to breathe in the idea of UCLA as a playoff contender with the ocean air.

Let’s go there. Assuming the Bruins can keep their focus and mojo going through the upcoming bye week, they don’t overlook feisty Fresno State on Sept. 18. Then it’s Stanford (embarrassed by Kansas State on Saturday), Arizona State (it’s at home, and now we can expect 70,000 strong in blue and gold, right?), Arizona (uh huh) and Washington (victims Saturday of hungry Montana Grizzlies from the Football Championship Series subdivision). A 6-0 record is certainly there to be had.

No. 11 Oregon, which trailed Fresno State 24-21 early in the fourth quarter Saturday before prevailing, visits the Rose Bowl on Oct. 23, and the Ducks have real issues offensively. Then it’s on to No. 24 Utah. That two-week stretch will show us whether we are being fools right now.

After that, a trip to the Coliseum looms Nov. 20. USC could end the dream in heartbreaking fashion, but Bruins fans shouldn’t worry about that right now, especially with the Trojans’ underwhelming effort Saturday against San Jose State.

Where’s the loss? Well, it’s college football, so it’s probably hidden in there somewhere. And if UCLA does lose one, will this Pac-12 (see above) have gained enough respect to get a one-loss team into the playoff?

Oh, disregard that. The fact such a scenario could even be debated shows that this is a Sunday morning worth savoring in Westwood.

If UCLA’s dreams come true, it better hope it isn’t the No. 4 seed in the playoff, because Alabama will surely be waiting there as the No. 1.

The Crimson Tide pummeled No. 14 Miami 44-13 on Saturday in Atlanta, sending a definitive message that Nick Saban’s dynasty no longer bothers with a rebuild.

Didn’t Alabama just go 13-0 and win the national championship and then lose eight starters from that offense and the offensive coordinator? Yes, that all checks out. Apparently, none of it matters.

Georgia will vault to No. 2 after its 10-3 win over Clemson — an absolute humiliation of the Tigers’ offense. That the Bulldogs beat Clemson without having to score an offensive touchdown shows they can get a lot better before they play Alabama in the SEC championship game. They’ll need to be.

Ohio State and Oklahoma will have every chance to be there at the end, too, but both teams don’t look like they could take down Saban’s Death Star after one week.

Don’t give up on DJ Uiagalelei

America got its first look at two Southern California star quarterbacks Saturday, and the difference couldn’t have been more stark for Alabama’s Bryce Young and Clemson’s DJ Uiagalelei.

Young, the Santa Ana Mater Dei product, handled everything Miami threw at him in his first college start, throwing for 344 yards and four touchdowns.

Uiagalelei, his Trinity League rival from St. John Bosco, completed 19 of 37 passes for 178 yards and an interception that went the other way for Georgia’s only touchdown of the game.

We shouldn’t overreact too much to Uiagalelei’s performance. His offensive line was totally overmatched and his receivers could not get separation. He was sacked seven times because of it.

Young was flawless against the Hurricanes, but let’s see how he looks when he plays that Georgia defense.

Steve Sarkisian’s debut as Texas coach could not have gone any better, as the Longhorns handled No. 23 Louisiana 38-18.

Sarkisian staged a quarterback competition during camp, and his choice, Hudson Card, was up to the task. Sarkisian, the former USC head coach, was smart enough to keep giving the ball to star tailback Bijan Robinson, who touched the ball 24 times for 174 yards and two touchdowns.

The pressure will grow next week when Texas visits old Southwest Conference rival Arkansas in Fayetteville.

Full transparency: I picked Wisconsin (lost to Penn State 16-10 at home) and Washington (lost to Montana 13-7 at home) as teams that could crash the CFP. The other teams — Iowa State, Cincinnati and Mississippi — should beware.

And UCLA fans, the fact I didn’t include your team is further reason to rejoice.