One last chance for summertime grilling

A cheeseburger with a side of potato salad, on Wednesday, August 11, 2021. (Colter Peterson/St. Louis Post-Dispatch/TNS)

It can’t be the end of summer. I’m not ready for summer to end.

So I did what any normal American male does when confronted with the sudden realization that his favorite season is about to end: I pouted.

But only for a short time. Then I bought a bag of charcoal and fired up the grill. There is nothing like grilling a lump of meat or a hearty vegetable to extend the pleasures of the summer and keep at bay the dying chill of autumn.

Grilling is primal, it is elementary. Thousands of years ago, our ancestors were grilling fatted calves and roasting whole lambs over a fire. They were not preparing a demiglace with champagne vinegar and shallots to use as a sauce.

So I decided to keep my end-of-summer grilling simple and basic, or at least simple.

Also, a reader asked for easy recipes. I may be distraught that the dog days of August are reaching their tail end, but at least I’m accommodating.

I started with a cheeseburger. Yes, everybody knows how to make a cheeseburger, but I have a trick (because I read it in a book) for making it even better: You grate the cheese directly into the ground beef, along with salt and pepper.

The advantage to this method is in the timing, which is directly related to the temperature.

It isn’t easy to get right. But with the cheese already mixed into the burger, it melts into the meat, which you can cook to the exact temperature that you like. When you eat it, you get a delightful pop of cheese flavor in nearly every bite.

I next made one of my favorite ways to make steak. It’s called Mustard Lime Steak because the steak is coated with a crust made from dry mustard, lime juice and Worcestershire sauce — and yes, I know that sounds awful.

But it isn’t. It really isn’t.

The sharpness of the mustard is softened by the umami earthiness of the Worcestershire sauce, with bright notes provided by the lime. It’s actually kind of genius, and is as delicious as it is unexpected. And because you slice the meat thin to serve it, you can use it on almost any kind of steak.

For a vegetable dish, I went with Grilled Asparagus With Olive Oil and Parmesan, an extraordinary dish from the restaurant Chez Panisse. That’s the Berkeley, California, establishment that basically started the food revolution in this country and is still cherished as one of the best in the land.

Many of its recipes are difficult, but this one is simple. Just coat asparagus spears in olive oil and season them with salt and pepper. Grill them until they are done, sprinkle with lemon juice and then top them with crispy pancetta and chopped egg.

Leave it to Chez Panisse to come up with a perfect balance of the dissimilar flavors. Thin shavings of salty Parmesan cheese on top thrillingly bring the dish to life.

My last dish took a little work to prepare, but only a little — and it was all done the night before.

Tandoori Chicken is one of the most popular dishes in Indian restaurants in this country. It is difficult to make at home, because doing it right requires a tandoor oven, a clay oven that cooks at about 900 degrees.

You probably don’t have one, though they are available. Nonetheless, you can create your own less-hot version of Tandoori Chicken in your own grill — using indirect heat.

I cobbled together a recipe, using ideas from two different sources and a few of my own. The chicken is marinated for several hours, preferably overnight, in yogurt mixed with a blend of spices. The mix that I used worked particularly well.

It does require eight spices, plus lemon juice, the yogurt and the chicken, and you are likely to have them all only if you cook Indian food fairly often. If you like, you could use garam masala — most stores carry it — to replace any of the ingredients you don’t have. The result will be different, but who knows? Maybe it will be better.

That said, the chicken I made was fairly amazing. Tandoori Chicken should not be a very spicy dish, but I put a little heat in mine for good luck. You can reduce or eliminate the cayenne pepper (or Indian chili powder) if you want it more mild.

It was just a remarkable dish for the end of summer. I’m sure I’ll be making it in the fall, winter and spring, too.

4 quarter-sized slices of ginger (peeling is not necessary)

1. In a blender or food processor, mix together yogurt, ginger, garlic, lemon juice, cumin, coriander, turmeric, salt, optional cayenne or Indian chili powder and cinnamon until smooth. Cut 2 or 3 slashes at least 1-inch deep into each chicken piece except wings. Coat chicken with marinade mixture in a bowl, cover and refrigerate 4 to 24 hours.

3. Prepare a grill with a lid for indirect heat.

1. Prepare a grill for direct heat.

2. Break up the chuck to increase the surface area for the seasoning and cheese. Sprinkle the salt, pepper and cheese over the meat; toss lightly with your hands to distribute evenly. Divide the meat into 4 equal portions; with cupped hands, toss one portion of meat back and forth to form a loose ball.

Recipe from “Steaks, Chops, Roasts and Ribs” by the editors of Cook’s Illustrated Magazine

1/4 cup dry mustard, such as Colman’s

2. Turn the steaks over and repeat on the other side. Let the steaks marinate for 15 to 20 minutes while you preheat the grill.

3. Set up the grill for direct grilling, and preheat to high.

4. Brush and oil the grill grate. Place the steaks on the hot grate and grill, turning with tongs, until cooked to taste, 4 to 6 minutes per side for medium-rare. Do not rotate the steaks, or you will knock off the mustard mixture. Transfer to a platter and let rest 3 minutes.

5. Slice the steaks thinly on the diagonal, as you would for London broil. Let the slices marinate in the meat juices for a minute or two, then serve.

Recipe from “The Barbecue! Bible” by Steven Raichlen

2. Toss the asparagus in the pure olive oil, and salt and pepper them lightly. Grill the asparagus over a medium-hot fire for about 5 minutes, turning the spears until the skin is shriveled and slightly charred all over. Test the asparagus for doneness at its thickest point with the tip of a knife; the asparagus should feel soft in the center. Transfer to warm plates and drizzle with extra-virgin olive oil and juice from 1/2 lemon.

3. Grill the pancetta for several minutes until it renders some of its fat and just begins to crisp. Coarsely chop the pancetta and strew it over the asparagus while still warm; sprinkle with the chopped egg. Top with thin slices of Parmesan. Serve immediately. 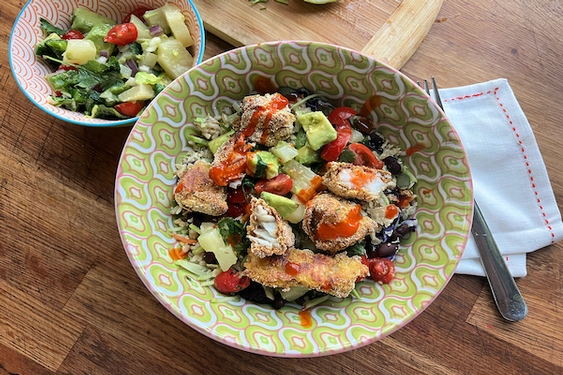 Recipes
Runners' fuel: What to eat when training for a race
56 views 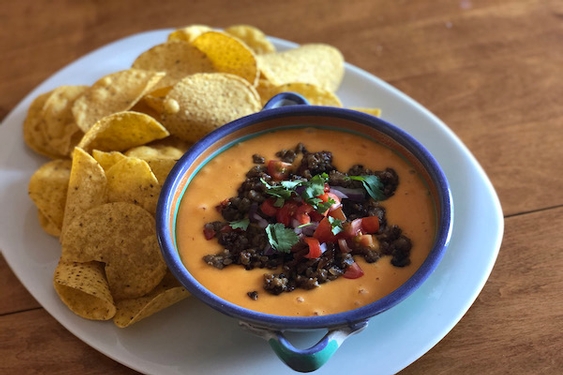 Recipes
Embrace the cast-iron skillet with 3 recipes perfect for the kitchen workhorse
2,450 views