Eggplant: A world of possibilities

Purple and bulbous with a neat green cap, eggplant is a funny-looking thing. And sometimes when you eat it, it makes your mouth itch.

No wonder people avoided eating it for centuries. It is a member of the nightshade family, and people reasoned that it must be poisonous.

But somewhere, at some time, someone took this bizarrely shaped fruit with the evocative emoji and fried it in a little oil with garlic and probably added a tomato sauce — and a whole new culinary world opened up to glorious exploration.

It also happens to be still in season, though the window for straight-from-your-garden eggplant is quickly shutting. Fortunately, through the magic of science and modern transportation, eggplant is available throughout the year.

And that is good, because I eat it throughout the year.

This particular week, I ate it five different ways.

I began with a classic, Eggplant Parmesan, though some of the other selections are going to get a little weird.

Eggplant Parmesan is beloved because it is the perfect use for eggplant and also for Parmesan cheese — not to mention tomato sauce and garlic. It is also an exceptional reason to use mozzarella cheese, but to be perfectly frank the ultimate application of mozzarella cheese is on pizza.

Typically when making eggplant Parmesan, thin slices of eggplant are breaded and fried before being stacked between layers of cheese and tomato sauce. But this version, which I gleaned from “The Silver Spoon” cookbook (it’s kind of the ubiquitous Italian version of “Joy of Cooking”) does not bread the eggplant.

It still pan-fries them, but it does not bread them. This way, the eggplant is a little creamier in texture. On the other hand, it may also have more calories, because nothing soaks up oil like unbreaded eggplant.

Either way, it is a rich and hearty meal that deserves a place in anyone’s cooking repertoire.

My next eggplant dish was a sandwich that would be entirely at home in a fancy sandwich shop or a restaurant focusing on fresh, healthful flavors.

You can tell, because it has a long name: Roasted Eggplant Sandwich With Arugula Walnut Pesto Mayonnaise.

You roast eggplant and put it in a sandwich with a spread made from arugula-walnut pesto and mayonnaise. But it’s even better than that, because it also has roasted red peppers and more arugula in it. It’s best when the bread — sourdough or ciabatta, if you have it — is toasted first.

To be honest, the eggplant isn’t the star of this sandwich. The sandwich stands out because of that pesto mayonnaise. It’s a brightly flavored spread, an exuberant combination of arugula and basil with a light citrus kick that could enliven any number of sandwiches, especially vegetarian ones.

But try it with eggplant. It’s a natural combination.

Because there is a long, thin variety of eggplant that is native to Japan, I decided to look for a recipe from that country’s cuisine. The one that intrigued me the most is Pickled Eggplant With Oil and Vinegar.

This is a quick and quite simple side dish made from julienned eggplant pickled for a few hours in a combination of sugar, vinegar, soy sauce and vegetable oil. It’s mildly salty and mildly tart, reminiscent of any number of popular pickles.

It’s how you present it that really gets your notice. Combining cold pickled eggplant with hot rice takes the dish to a higher plane of dining excellence.

My next dish was an Eggplant Terrine, and terrines are always fun to make. They are even more enchanting to serve to guests, who will be suitably impressed.

A terrine is a loaf of meats or vegetables pressed together and served in slices. Meatloaf, for instance, is technically a terrine, though terrines usually come more aspirational than that.

This eggplant terrine is made from layers of thinly sliced, broiled eggplant and Emmentaler cheese, held together with a combination of eggs, colorful chopped bell peppers and more cheese. It is served with a simple tomato sauce that you can whip up in the time it takes to bake the terrine.

It’s a great meal to serve when you want to make someone feel special.

Finally, I tried a Chinese dish, Eggplant With Peanut Butter, that comes from the province of Shandong.

Peanut butter is not unknown in China — think of the famous cold noodles in peanut sauce — and the rest of the ingredients are absolutely essential for a basic stir fry: ginger, garlic and toasted sesame oil. The only question is how well the eggplant pairs with the peanut butter.

I could see where it would be popular in Shandong, but the combination is not immediately pleasing to the Western palate — though neither is it entirely displeasing.

Let’s just call it interesting, and leave it at that.

1. Place the eggplant slices in a colander, sprinkle with salt and let drain about 1 hour. Meanwhile, put the tomatoes and 4 to 5 basil leaves in a pan, season with salt and pepper and a pinch of sugar to taste, and cook over high heat, stirring frequently, for 15 to 20 minutes. This will yield 1 cup of tomato sauce.

4. Spoon 1/4 cup of the tomato sauce into an 8-by-8-inch ovenproof dish and arrange a layer of slightly overlapping eggplant slices on top. Sprinkle with a little of the Parmesan, cover with a few slices of the mozzarella; sprinkle a few basil leaves and 2 tablespoons of the beaten eggs on top. Season lightly with salt and pepper.

5. Continue making layers until all the ingredients are used, ending with a layer of sliced eggplant, sprinkled Parmesan and tomato sauce. Dot with the butter and bake 30 minutes. This dish is also good served cold.

Peel eggplant, cut in 1-inch chunks and set aside. Heat oil in a wok or skillet and stir-fry garlic and ginger 20 seconds. Add eggplant and stir-fry another 20 seconds. Blend in peanut butter, salt and water. Cover, bring to a boil, lower heat to medium and cook 5 to 7 minutes until eggplant is tender. Stir in sesame oil and serve. May also be served at room temperature.

Recipe from “Regional Cooking of China” by Maggie Gin

1. Preheat oven to 350 degrees and line a baking sheet with parchment paper.

2. Place sliced eggplant on a cutting board and sprinkle with salt. Allow to sit until the oven is done preheating. Wipe the salt (and the liquid released) off the eggplant slices with a paper towel or clean kitchen towel. Place eggplant on the baking sheet and drizzle with olive oil, salt and pepper to taste. Cook in the oven for 20 minutes, flipping halfway.

3. While the eggplant is cooking, prepare the pesto mayonnaise. Combine 1 cup of the arugula, the basil, walnuts and garlic in a food processor. Pulse until combined, scraping down the sides as needed. Add the olive oil, lemon juice, salt and pepper and pulse until smooth. Taste and adjust seasonings as needed. Spoon the pesto into a bowl and add the mayonnaise. Stir to combine and refrigerate until ready to use.

Slightly adapted from a recipe by thissavoryvegan.com

2 tablespoons olive oil, plus 3/4 cup or more for drizzling and brushing

1. Preheat the broiler. Line a loaf pan with parchment paper (spreading a little butter on the inside of the loaf pan will help it to stay in place). Place the bell peppers on a cookie sheet, drizzle with oil and roast, turning frequently, until charred and blackened all over. Remove from the oven, place in a plastic bag and seal the top. Do not turn off the broiler. Brush the eggplant slices with oil, place in a single layer on the baking sheet and broil until golden brown on both sides; this will require a few batches.

3. When the bell peppers are cool enough to handle, peel, seed and chop the flesh. Make a layer of eggplant slices in the prepared pan. Grate 1/2 cup of the Emmentaler and slice the remainder. Stir the grated Emmentaler, chopped bell peppers and a little basil into the eggs and season with salt and pepper. Arrange a layer of Emmentaler slices on top of the eggplant and spoon in some of the egg mixture. Continue making alternate layers until all the ingredients are used, ending with the egg mixture.

4. Place the loaf pan in a roasting pan, add boiling water to come about halfway up the sides and bake 1 hour.

5. Meanwhile, put the tomatoes, the 2 tablespoons of oil and garlic in a small pan, season with salt and pepper, and cook over medium heat, stirring frequently, for 20 minutes. Remove and discard the garlic.

6. Remove the terrine from the oven, unmold onto a warm serving dish, discarding the parchment paper, and serve with the tomato sauce.

PICKLED EGGPLANT WITH OIL AND VINEGAR

Peel eggplant and julienne as finely as possible. Lightly salt and let stand 10 to 15 minutes. Squeeze out liquid. Combine vinegar, sugar, oil and soy sauce in a small saucepan and heat to a simmer. Pour over eggplant and refrigerate a few hours, tossing once or twice. Serve cold with hot rice. 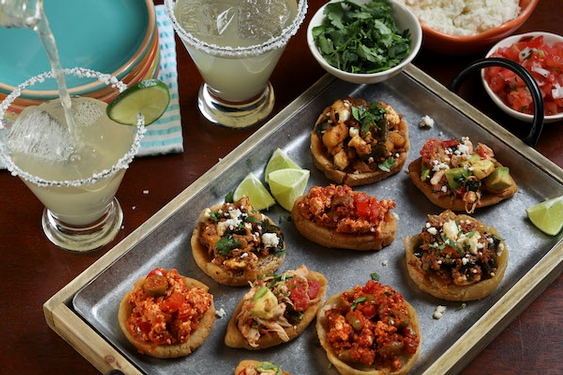 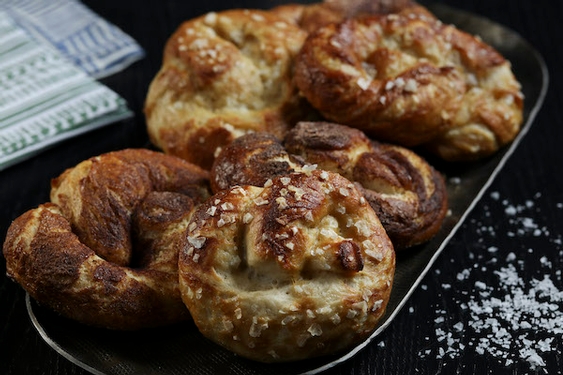