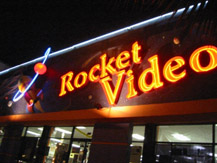 Un Chien Andalou . In English it means “An Andalusian Dog.” While no such animal exists (there is an andalusian horse), the phrase is the title of a surrealist short film, co-directed by famous film director Luis Bunuel and equally famous artist Salvador Dali.

It's often regarded in the eyes of most film critics like Roger Ebert as the most famous film short ever. Cinephiles can't be regarded as cinephiles without having seen the film. It's that revered.

The work is full of fantastic images: ants emerging out of a man's hand, a man carrying two grand pianos containing dead donkeys, the tablets of the Ten Commandments, two live priests and a severed hand being poked in the street. The film's high mark is its first scene: a woman's eye being slit by a razor. Take these images into consideration and you can figure out why it has received such notoriety.

Images, whether they make you squeamish or not, need to be seen. A benchmark for all video stores is Un Chien Andalou . Do Blockbuster Video or Hollywood Video carry it? Nope. One of the few video stores in Los Angeles that has the surreal short – as a staff pick no less – is adjacent to another preeminent local L.A. treasure, Pink's. While you munch on a Harry Potter Dog or a Lord of The Rings dog (a treat fit for Rivendell containing barbecue sauce and onion rings on a 10 inch stretch of dog) at Pink's, cap off the evening by grabbing a copy of some actual cinematic pleasures from Rocket Video.

One is truly free to release his inner movie nerd at Rocket Video. Enjoy the sheer bliss of a Blockbuster-like sized store with a selection straight out of the Internet Movie Database. The store's exterior boasts posters of current films like Scoop and Factotum while its interior is littered with photos of Rocket Video guests like animation legend Ray Harryhausen and actress Faye Dunaway. It's all just pure butter to the popcorn that is the collection, and fear not because popcorn is served.

Documentaries, almost any current TV show out on DVD and music programs are available. Average John/Jane Doe who enjoys a good new release or who's feeling adventurous and wants to see something out of the ordinary like a blaxploitation film will be satisfied. Still the store is perfect for the Pretentious Pete who lives and breathes film. If on any given night he feels like watching Lars Von Trier films, obscure '50s sci-fi and Hong Kong chop socky, it'll be there … plus more.

Gliding down the aisles with reckless abandon a la Mad Max, Pretentious Pete goes through the different categories. On one end is the section of only Criterion Collection selections, a DVD gold standard that churns out high quality releases of masterworks (i.e. Michelangelo Antonioni's L'Avventura with extras galore).

At the other end of the store is the Directors Series, a wall-to-wall symphony of features broken down by some of cinema's highest of auteurs. From Pedro Almodóvar to Woody Allen, it's a Cinema 350 course book without the necessary words and such.