Orlando Bloom: Explores Corruption in the Caribbean in Haven 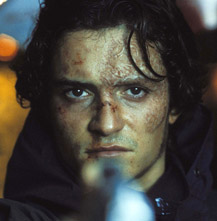 In Haven , an indie film by Frank E. Flowers, the Cayman Islands serve as the canvas for this multi-layered allegory of how financial greed impacts the non-financial values of love, respect and compassion.

The wealth that flows in and out of the island has translated into Caymanians enjoying a high standard of living; yet, it's not the paradise that attracted Orlando Bloom and the rest of the cast to this film, but the opportunity to illustrate an alternative to its one-sided illusion.

“You go on holiday to the Caribbean islands and you see one side of it,” Bloom says. “You're there to relax and you don't understand what the underbelly of that island is. In this movie, you get to see the underbelly.”

The “underbelly” is craftily illustrated through several intersecting plots. While Shy (Orlando Bloom) and Andrea (Zoë Saldana) struggle to overcome the pain of their forbidden love, a Miami businessman (Bill Paxton) seeks escape from FBI agents and a sly teenager (Victor Rasuk) attempts to pull off a heist.

Born and raised in the Caymans, Flowers utilized this multi-dimensional style of storytelling to capture the realities of a small, enclosed island.

“It's about perspective. Sometimes you see things one way and as you get closer, you see it from a different way,” he says. “When you grow up on an island, everything is involving everyone else somehow and I thought it was important to bring those themes into this film.”

The themes are heavily centered on the delicate nature of money and its exploitative powers. On one hand, money brings security and luxury to the island. On the other hand, it threatens its sanctity.

Although Bloom does not carry the film, his involvement sparked its production and cohesion. He agreed to work with Flowers after being so impressed with the script and eventually signed on as a producer. Haven represents an artistic foray for the actor who is more familiar with blockbuster movie making. But as Bloom tells it, he has been hungry to engage himself in something different.

“I've been desperate to be part of an independent movie and the experience of making this film was truly remarkable and everything I'd hoped it would be,” he says.