The U.S. vs. John Lennon: (Lionsgate) 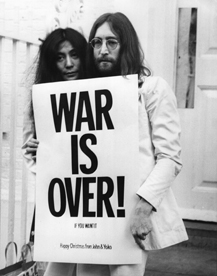 Everyone should love John Lennon. Loving John Lennon is like loving chocolate or puppies; it's a reaction that seems basic, instinctual and undeniably true.

It is the shining force of the man's capacity to care that carries The U.S. vs. John Lennon , a rather clunky documentary following Lennon's political development and involvement with the countercultural movements of the late 1960s and early 1970s, and the Nixon administration's subsequently shameful attempts at silencing him.

Writer/directors John Leaf and John Scheinfeld have spent the majority of their careers producing and directing television documentaries, and the film has the feel of a glorified “Behind the Music,” assuming the audience needs to be told the exact meaning of events with the precision pacing and concise analysis of a Nikki Sixx overdose.

That is not to say they aren't covering important cultural/historical ground here. Some of the footage brings back the truly pointed anger of the anti-war movement, with crowds chanting FU to LBJ at the violent 1968 democratic national convention in Chicago, or showing very real bodies piling up in Vietnam.

But to a large extent, it's the same old hippies dancing in the mud to Lennon's same old rock 'n' roll soundtrack. And further, there is a problem of historical emphasis; Lennon is made to seem a legitimate threat to Nixon rather than one of many at the unfortunate end of Tricky Dick's filthy tentacles.

While the narration does have the benefit of major thinkers like Noam Chomsky and Gore Vidal and a coterie of political and cultural figures of the time – including everyone from the still cantankerous Nixon official G. Gordon Liddy, to the mellowed black panther leader Bobby Seale, the documentary seems most comfortable relying on the news-ticker headlining of Geraldo Rivera, who remarkably, seems to have aged along with his mustache little if at all since interviewing Lennon in the early '70s.

The narrative is perhaps too sympathetic to the bizarre nature of John and Yoko's protests, which include staying in bed for a week (with reporters watching) during their honeymoon to promote peace and declaring themselves citizens of a magic foreign land where all is peaceful and well, and any can become citizens.

The film doesn't take into account the possibility that all the utopian attention clamoring might have been for naught, that it was just the power of Lennon's Beatles fame that allowed him to have any voice at all. For all his struggles; the understandable paranoia of phone taps and being followed in public, and the multiyear battle not to be exiled from his adopted country, how much more intriguing would it have been to examine this amazingly likable character and see if he really was or was not, as a New York Times interviewer puts it “living in a never never land”?

Sadly, allowances for such sophistication are lacking, and the pacing is as heavy handed as the five ear ringing gunshots used to mark Lennon's murder. The film will appeal to some with the Lennon footage alone, but the rest is just a high-school history flick taking muddled and tentative steps towards serious portrayal of recent and relevant history.

The U.S. vs. John Lennon releases in select theaters Sept. 15.