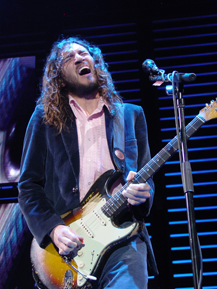 Gracing us with their presence for yet another amazing tour, funk rock gods the Red Hot Chili Peppers proudly took the stage for a round of back-to-back sold out shows at the Forum in Inglewood.

While openers the Mars Volta damaged eardrums with extremely loud high-pitched Bee Gee vocals, people fled to replenish their beer supply. Their army of musicians gave no more to the set than Cedric Bixler-Zavala could have on his own.

Appearing in his colorful spandex paisley-printed unitard, Flea alone made up for the fashion originality Mars lacked. For their hometown show, the members of RHCP were dressed to impress with Anthony Kiedis and John Frusciante decked out in formal wear and Smith in a bright new baseball cap.

Opening the show with one of many tasty three-man instrumentals and following that with the funky groove of “Can't Stop,” Kiedis danced his patented gymnastic-karate-booty shake with reckless abandon.

It was clear that fans wanted some older songs, but tracks from the RHCP's new epic double disc Stadium Arcadium were well received, but the group threw in songs from almost every record throughout the set.

While Kiedis has been known to fall short vocally in live performances, this night was leaps and bounds better than the past. He nailed both slow melodic songs like “Scar Tissue” and “Stadium Arcadium” as well as his untested rapping funk on the sexy “Blood Sugar Sex Magik” and “Me & My Friends.”

Kiedis is not the only one who commands attention on stage as a silently admiring and slightly confused crowd stood for Frusciante's surprisingly beautiful and strong cover of the Shirelle's song “Will You Still Love Me Tomorrow?” This performance showed that he's an arguably better ballad singer than Kiedis.

Redeeming himself, Keidis peeled the layers of formality off to reveal his perky tattooed torso to the endless screams of female fans. His still fab but obviously fading physique left some gals wondering if he'd look like Iggy Pop in a few years.

Yet after the rock star lives these four have lived it's hard to believe they can still be this sunny and exuberant as the years pile up. Maybe it's all that yoga and tea drinking.

While some RHCP shows have been hailed as impersonal, they really opened up to the L.A. crowd as they (sometimes incoherently) spat out personal jokes and heartfelt memories with a youthful vivacity.

Mistakes aren't common for bands this ripe, yet Frusciante had technical difficulty starting “Snow (Hey Oh).” After the rough start and looking angry with himself, he pulled it together for another well-performed new track.

The stage setup wasn't too shabby in the visual realm with Smith's light up drum set, an elaborately lit Fremont Street-style stage and ceiling and high-tech video segments.

With a mix of great yet predictable songs in the set, one addition was ingenious as they combined a cover of “London Calling” with “Right On Time.”

They ended the funk rock assault with a completely predictable encore of “Give it Away” and a lighter waving rendition of “Soul to Squeeze.”