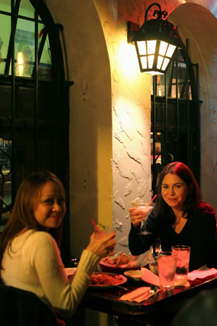 A big part of the appeal of late-night dining is that there's no “I can't believe I just ate that” factor. Chances are you're going to be in bed dreaming about candy canes and unicorns by the time the food has reached your stomach.

In the wee hours of the night people are better looking, the city is much more beautiful and food tastes that much better. I'm sure if vampires dined on their human prey during the day they'd probably be unable to withstand the taste of blood. At night, however, it's warm and filling so that's really all that matters.

In fact, if you eat Tommy's during the day, you're definitely going to be counting down to your visit to the lavatory, all the while wondering how you finished a Double Chili-Cheeseburger, Chili-cheese Fries and a Diet Pepsi. The Diet Pepsi is mandatory, because drinking a fully sugared soft drink with a meal at Tommy's is pure gluttony.

A scourge of the Southland is the plethora of Tommy's imitators doing business under slightly remixed titles of the Original Tommy's. There's Tom's, Thom's, Thomas's, Tommy's (notice the absence of “Original”) and many other similarly christened establishments. If you are sober enough to notice the difference at 1:52 a.m., then chances are you're not going to be in the mood for a Chili-Cheeseburger.

Let me begin by admitting that I know that there are absolutely no good reasons why one should be in Studio City at 3:38 a.m. That being said, my friend Andrew and I found ourselves zooming through the Valley late one night in pursuit of the mythological beast known as the dipped cone. As everyone knows, dipped cones are delicious, so it's safe to assume that we were not the first to embark on such a journey.

Soon we discovered two things: that we had no idea where to find a dipped cone in the hours after Foster's Freeze closes, and that we were hungry enough that we would eat just about anything. Roughly half a mile later, “anything” took the form of Twain's.

The first thing I noticed about the place was how nice our waitress was. If I were delivering plates of hash browns at ungodly hours I would be as bitter as Dr. Claw after being vanquished by Inspector Gadget. Actually, I would be unhappy delivering hash browns at any hour (and it was usually Penny and Brain who foiled Dr. Claw's diabolical schemes).

All cartoon plots and potato byproducts aside; Twain's serves excellent diner food at a reasonable price so if you're ever stuck in Studio City way past your bedtime make sure to stop by.

Despite what the hipsters at Swingers and Mel's want you to believe, it is really not that cool to be seen dining with your friends after a night out. While the trendier spots may read like a who's who of who didn't find someone to hook up with (and often for obvious reasons), you definitely don't have to worry about being seen at Izzy's Deli.

Given the atmosphere at Izzy's, you may almost wish that no one from your Pilates class stumbles across you devouring corned beef hash and a Dr. Brown's Cream Soda. I wouldn't be caught dead in a Pilates class anyway, so I'm able to enjoy my magnificent plate of breakfast meats and over-medium unborn poultry with a clear conscience.

The ambiance at Izzy's is roughly equivalent to that of an adult bookstore (Hypothetically speaking, of course. I'm a good person!), with their darkened windows and off-street entrance. High school kids out way past their curfew, bar goers stumbling in from the nearby bars and elderly Russian couples often make up the majority of the clientele. Until I visited Izzy's for the first time, I'd actually never seen any old people out after 10 p.m.

The menu consists of standard deli fare, which suddenly becomes superb deli fare when you're hit with an intense craving for matzo-ball soup shortly before the 2 a.m. “SportsCenter” comes on. Izzy's greased-lightning service will have you in front of your television so you can catch the footage of the Dodgers tanking just in time for the playoffs.

Nightclubs and bars, while great, are often difficult arenas in which to participate in quality conversation. While dancing and drinking may create a spark, sometimes a nice quiet place (and more alcohol) may help really fan the flames. If you are looking for the perfect setting to get to know the girl you just met at last call, look no further than La Cabana.

It is also a great place to bring that guy you just met, that guy and girl you just met, or that burly group of matadors and their pet bull Dartanian. I've lived in L.A. my whole life so nothing really surprises me anymore. Although if you bring the matadors you'll probably have to leave the bull outside.

Open until 3 a.m. every night of the week, La Cabana has an unrivaled selection of quesadillas and reigns supreme as the home of the best margaritas on the West Side after midnight. While that may be interpreted as an honor similar to that of Miss Southwest Wyoming, it's actually very important. Who really wants to drive back from some godforsaken place such as Silverlake with five margaritas bouncing around your stomach?

As a word of advice, if you are dining (or drinking) with someone you just met in a bar or club avoid the patio at all costs. It is the only well-lit section of La Cabana, so don't let some particularly good lighting lower your evaluation of your “date.”

In fact, the brilliant combination of dim lights, strong margaritas and red velvet decorations may make just about anyone good-looking. Even the matadors' pet bull Dartanian.