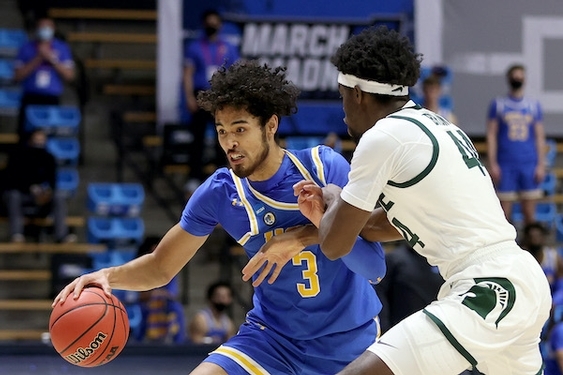 The UCLA Bruins are looking pretty solid this season and have no plans on wasting time when it comes to improving. The program has started the ball rolling on a mostly unknown player, having offered class of 2024 forward Yves Missi a scholarship this past Wednesday.

UCLA is the fifth team to offer the player a scholarship but the first on the West Coast,  with DePaul, Norfolk State, St. Johns, and South Carolina Upstate getting a jump on other colleges too.

Missi has been moving up the AAU ranks and has played for Nottingham Academy since moving to the United States less than a year ago. He got on the RecruitThe Bronx’s Top Performers list at the 2021 Hoop Group Atlantic City Jam Fest back in July and is described as: “A forward that establishes his presence when he’s on the floor and is able to impose his will against the opposition. Has good size and good hands and is able to get rebounds at all times. Is able to score at all times, as he uses his toughness around the rim.”

The 6ft 11in big man is already college height at 16 and is very skillful for someone his height, though that’s becoming the standard for professional basketball in the current era. He’s deceptively quick and can create his own shot off isolation plays as he’s able to make his way through the paint and get points through contact. The Cameroonian is a comfortable shooter from distance as well.

Defensively, he has shown a knack for blocking shots and is also a great rebounder.

The teenager is listed as a two-star composite player on VerbalCommits.com at the moment and does not yet have a ranking on 247 Sports, ESPN, or Rivals but is very likely to see his profile improved in the next few months as he has received multiple offers and should be getting more.

UCLA coach Mick Cronin is likely to have connections over there given the situation with Etienne last year. Of course, the player has a few years to go before making a decision on where he would like to play collegiate basketball but UCLA’s involvement will be very good for his recruitment prospects.

As mentioned above, UCLA has been quite impressive so far. Fans could be forgiven for having their doubts over the program as it’s nothing new seeing a talented team make a deep run in the NCAA Tournament, bringing all their players back, and going into the new season among the favorites for the chip.

Sure, it was worth considering that the Bruins kicked off that First Four run as a No.11 seed. But all of the doubts seem to have been wrongly placed and UCLA has indeed lived up to the hype. They’re really as good as the experts pegged them to be back in the summer and folks who bet on them early should be feeling pretty excited over their NCAAB picks. The Bruins are 12/1 to win the NCAA Tournament at the end of the season, only behind the Gonzaga Bulldogs, who are 7/1 after failing at the final hurdle this year.

The Bruins pulled off a statement overtime win over Villanova last Friday, which is saying something as the Wildcats are a very good, very well-coached team.

They made UCLA play their game, keeping things low tempo and taking time off the clock to execute and settle for the best shot. The Bruins stuck with it, having struggled as star guard Johnny Guzand missed practically all of his shots in the first half before finding accuracy in the second.

They finished the game quite authoritatively in the overtime period but, more impressively, showed they could be meticulous in their execution too.

“Well, they do know how to win,” Cronin said after the game.

“Just thanking the students,” he added. “I appreciate all of the donors, but the students are the ones that bring excitement.”

Jaime Jaquez Jr., who brought energy to what was a very scrappy game, said “I think it just comes from the personalities we have on this team. I know myself, Johnny and Tyger [Campbell], we live for that, we live for the crowd, we live for those big moments and it just feeds us more fuel and when we need someone to make a great shot, we’ve got guys that can make those, so I think it’s just something that we have inside of us.”

They will face the biggest challenge of the new season when they play the Gonzaga Bulldogs next week.