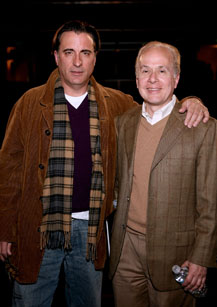 It's that time again! Stephen Farber, a film critic for Movieline's Hollywood Life and regular contributor to the L.A. Times , ushers in a new season of his “Reel Talk” series, in which he screens upcoming releases and couples them with director, producer and actor Q&A's.

The fall series, which will be held every Monday night at 7 p.m. at the Wadsworth Theatre in Brentwood, kicks off September 18 with a screening of Director James Burke's (In Dark Places) Aurora Borealis . The film stars “Dawson's Creek” alum Joshua Jackson as Duncan Shorter, a shiftless young man who suddenly develops a sense of responsibility while attempting to take care of his sick grandfather, Ronald, played with Oscar-worthy appeal by Donald Sutherland. The film also stars Juliette Lewis ( Cold Creek Manor ), Steven Pasquale (TV's “Rescue Me”) and Louise Fletcher ( Cruel Intentions ).

The screening will be followed by an in-depth Q&A with Jackson and Burke, during which Farber – doing what he does best – will attempt to dissect the film with both the audience and his guest speakers.

The Wadsworth Theatre is located at 11301 Wilshire Blvd., in Brentwood. For more information on this or upcoming programs, or to purchase tickets, visit www.landmarktheatres.com or www.richmarkent.com.