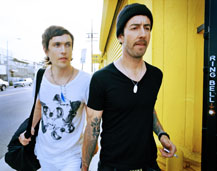 OK, maybe the band just wants to make you think a little bit.

“ We like to find those real messages and beautiful things about writing songs, but we also come from this disjointed, screwy background so we end up performing these songs, breathing life into them with an off-kilter, weird thing which I think most people are looking for without knowing they're looking for it,” explains guitarist Timmy “the Terror” Anderson.

“People are looking for something slightly left of center, I think. That's what I'm always looking for, that thing that isn't obvious. I'm hoping that's what it is about our music that's it's just not extremely obvious so it takes a little effort on people's parts to get into it, to get in there.”

It's been nine years since Anderson and vocalist Alex Ebert formed Ima Robot as an outlet to express their love for art and music. After enlisting Oligee on keyboards, the trio began playing shows in Los Angeles, but things really didn't start taking off for them until they moved into a house in Laurel Canyon that later became a famous party spot, the Ima Robot House. Anderson recalls, “ We moved into that house and caught a magical vibe, started recording songs in that living room and captured something good in there.”

In fact, the very demos that got the band signed to Virgin Records were recorded in that house at a time when the band was really coming into its own. “We had come to a point where we were starting to not be kids anymore and starting to get a little nervous because we all of a sudden became, like a computer becoming aware of itself, aware of the music business – this whole concept of having to get signed and make records to be able to keep playing music for a career. We wrote all of the songs like ‘Alive,' ‘Dynomite,' ‘Scream' in a week or two period, Alex and I, in that house and recorded them all in the living room. These demos were what got us signed from years of total obscurity.”

Around this time, bassist Justin Meldal-Johnsen (JMJ) and drummer Joey Waronker abandoned their posts with Beck to join the ranks of Ima Robot and the band began touring in support of its self-titled Virgin debut. Its kinetic onstage energy and songs like “Dynomite” and “Black Jettas” had crowds dancing their asses off from Coachella to Warped long before the Killers or Panic! at the Disco were even a blip on pop culture's radar.

Although Waronker and JMJ have since parted ways with the group, Anderson realizes the impact they both had on him and Ebert. “We've had so many amazing musicians in this band who have jumped on board and wanted to be part of it for no other reason than just being part of the experience. Playing with those people for years, Alex and I were the kids out of everyone. We were the inexperienced, crazy kids [who] considered performing breaking everything, hurting ourselves or passing out.”

Touring with the accomplished musicians led Anderson and Ebert to develop the major performance oriented credo they still follow to this day, “every show has to be a memorable experience for everyone in the crowd.”

Having recruited Filip Nikolic on bass, Scott Devours on drums and Andy Marlow on guitar and keyboards, Ima Robot is set to unveil a new album Monument to the Masses, which Anderson calls “ a lot simpler of a record musically, it's a lot more uncloaked.”

With lead single “Creeps Me Out” getting play on Indie 103.1 and the band's profile being showcased on the front page of MySpace, Anderson admits there has been at least one case of backlash at the strong marketing push by Virgin. “Since we've been getting a ton of hype for this new record, all of a sudden there was one kid who was like, ‘Fuck you guys, you guys sold out, you guys suck.' I was waiting for that kind of. We love music, we've done so many songs we want people to hear it all and unfortunately the only way to do that is to expose yourself in some way.” He continues, “It was funny to me because I was that kid when I was young. As soon as my favorite little punk band started blowing up, I'd be like, ‘fuck it, screw them.' I get it. It's going to be really emotional for me if we have some kind of major success and people accredit it to selling out because that's never been our reality we've always wanted to just make music for as long as we can.”

With Monument, Ima Robot won't remain one of L.A.'s best-kept secrets for much longer and that is perfectly fine with Anderson. He remarks, “I would be happy if it was just one song that reached everywhere. I just want to have that moment in history, moment in time, be part of the big musical picture. I'm such a fan of music; all I ever wanted to do was be a part of it.”

Monument to the Masses is currently available. For more information, visit www.imarobot.com.