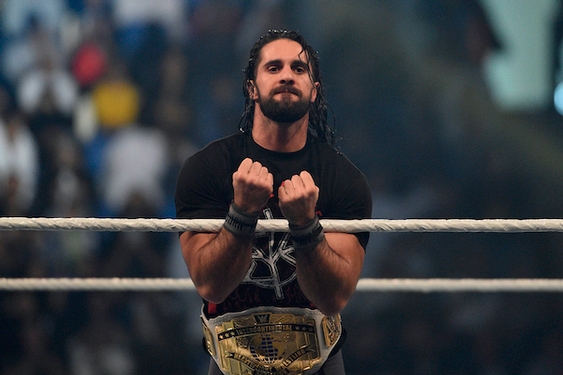 eth Rollins makes his way to the ring during the WWE World Cup Quarterfinal match as part of as part of the World Wrestling Entertainment (WWE) Crown Jewel pay-per-view at the King Saud University.

The latest WWE beef, pitting a star wrestler against a hardcore Brooklyn fan, was unscripted and sparked by a bizarre two-year dispute.

Fan Elisah Spencer 24, charged wrestler Seth Rollins from out of nowhere after the grappler’s Monday night Barclays Center match with Finn Baylor, taking the WWE star to the ground before staff and security subdued and carried the intruder away. He now faces criminal charges in the wild attack.

Spencer told the Daily News he was trying to assist Rollins’ rival during the Monday Night Raw show — and wanted to settle a beef dating back to 2019 over what appears to be a catfishing scam concocted by someone posing as the popular wrestler.

“I apologized to the WWE for my actions,” Spencer told The News at his Red Hook, New Jersey, home. “I had a legitimate beef but as a grown man I could have settled it a different way ... If I saw him today I wouldn’t attack him. I’ve moved on.”

Spencer told The News he first met Rollins at a meet-and-greet a few years ago, where he asked the wrestling star for help to launch his own career in the business. But things went south after he started communicating on WhatsApp and other messenger services with someone he remains convinced was Rollins.

“He was asking to send me gift cards in exchange for money, mostly $500 or more to see if I was loyal,” he said. “He asked me to be a wrestling blogger for him. I wanted to work my way up.”

After buying about $3,000 in cards, the check that “Rollins” sent back bounced.

Spencer said he communicated with Rollins through accounts under his WWE name and his real name, Colby Lopez, and was blocked on social media by Rollins’ wife, Becky Lynch, who is the current Raw Women’s Champion.

He posted chat logs between himself and “Rollins” on his Instagram account after Monday’s incident, but none of those exchanges showed anything that would prove he was actually talking to the wrestler.

“All your true fans love you a lot and and the ones that are fake fans will be fake fans,” Spencer wrote in one social media exchange. “I am a real fan of yours.”

Rollins, speaking Wednesday with TMZ in Los Angeles, offered no indication of any interaction with Spencer — and called for a ban on the fan’s attendance at future WWE events.

“It’s terrifying, brother,” said Rollins. “It happened very quickly. Once the tackle happened, I knew what was going on. The guy was barreling around the corner.”

“I jumped from where I was sitting at. I ran and speared Seth Rollins. I busted his lip open and he caught me in a headlock,” he continued. “I broke the headlock and I was trying to get him, then the referees and the security guards broke us apart.”

Police charged Spencer with attempted assault and attempted violation of arts and cultural affairs by disrupting a live sporting event. He was given a desk appearance ticket to appear in court at a future date and released.

“WWE takes the safety of its performers very seriously,” the professional wrestling company said in a Wednesday statement. “The individual who attacked Seth Rollins has been turned over to the NYPD and will be prosecuted to the fullest extent of the law.”