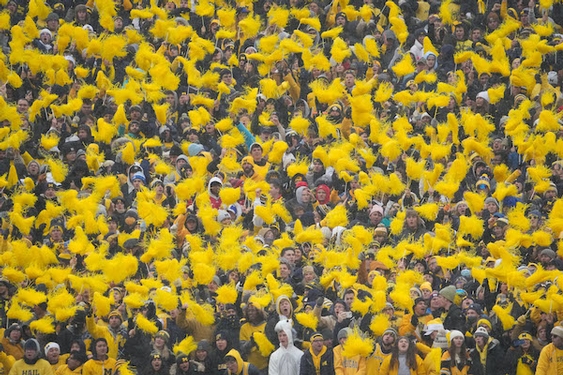 Michigan fans cheer during the second quarter of action against Ohio State at Michigan Stadium.

Fresh off its monumental win over Ohio State, Michigan landed at the No. 2 spot in the penultimate edition of the College Football Playoff rankings Tuesday night.

Michigan can secure its first outright Big Ten title since 2003 by defeating No. 13 Iowa in the Big Ten Championship Game Saturday. A win over the Hawkeyes should be enough to help the Wolverines earn their first semifinal spot.

Georgia (12-0) took the top spot for the fifth straight week after blanking Georgia Tech, 45-0. The Bulldogs appear to be a lock for one of the four semifinals spots even though they still face Alabama in the SEC Championship Game Saturday.

Alabama (11-1) remained at No. 3 after needing a fourth-quarter rally and four overtimes to get past Auburn. The Crimson Tide would need a win over Georgia to avoid falling out of the top four.

Cincinnati (12-0) also stayed unchanged at No. 4. The Bearcats, who hope to become the first Group of Five team to qualify for the semifinals, face No. 21 Houston in the American Athletic Conference Championship.

Notre Dame (11-1) remained at No. 6 after wrapping up its regular season with a 45-14 win over Stanford. The Fighting Irish remain in the playoff mix but would need wins by Georgia and Baylor to make it happen.

Playoff chairman Gary Barta said the departure of Notre Dame coach Brian Kelly didn’t impact this week’s rankings but could in the future.

“Once the championship games wrap up, our protocol does include the ability for the committee to consider a player or coach not being available,” Barta told ESPN’s Rece Davis.

These are the fifth of six weekly rankings released by the 13-member selection committee, with the final standings revealed on Sunday, Dec. 5. Those rankings will determine the four semifinalists and the teams participating in the New Year’s Six bowl games.

The two semifinals, which rotate annually, will occur in Dallas at the Cotton Bowl and Miami at the Orange Bowl on Friday, Dec. 31.

If Cincinnati doesn’t qualify for the semifinals, the Bearcats will earn an automatic spot in one of the New Year’s Six Access bowl games as the top-ranked conference champion from the Group of Five.