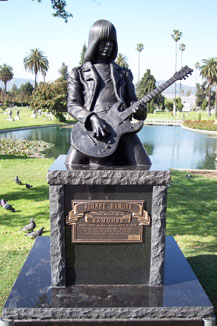 Ducks love Johnny Ramone. Not Dee Dee or Tommy. You’d expect them to quack over Joey, but it must be the guitar because the ducks flock to Johnny’s cenotaph at Hollywood Forever Cemetary, the resting place for Hollywood’s immortals. Visitors pay respect to various luminaries from the worlds of film, television and – in the case of Ramone – music that are interred in the hollowed grounds. A bronze statue of Ramone is on display for all to see, including those ducks. His signature bowl cut is captured, but most notably the skills that Ramone will most be remembered for – his breakneck speed of guitar playing that became so synonymous with him and him alone – is captured and honored through the statue. Once you’ve steered clear of duck danger to garner a good enough look at Ramone’s plot, you’ll discover that the tribute continues. Quotes from actor Vincent Gallo and Red Hot Chill Peppers guitarist John Frusciante are etched on the cenotaph. It’s a fitting tribute to a legend that is surrounded by other Hollywood luminaries. Close by is the burial plot of Mel Blanc, man of 1,000 voices, Daffy Duck being just one of them. Founded in 1899, Hollywood Forever Cemetery was originally called Hollywood Memorial Park Cemetery. By 1920, 40 acres that were being unused were sold to film companies like Paramount (which is still close by) and RKO pictures on the south-facing boundary on Melrose Avenue. Like every Hollywood story, this one is full of conflict: accusations of financial negligence led to the state of California disallowing the sale of plots. On the brink of bankruptcy, a happy ending appeared, this time in the form of Forever Enterprises who purchased the cemetery, changed the name and most importantly, refurbished the area, including that of the mausoleums – some of the oldest in California. Always intriguing, Hollywood Forever is revered, having been listed on the National Register of Historic Places. The fascination over cemeteries can be considered morose but tourists and film aficionados still continue to flock. It must be the celebrity infused hysteria mixed with the out of the ordinary location that draws them in. Film giants like directors Cecil B. DeMille and John Huston, cinematographer Gregg Toland and actor Douglas Fairbanks are continually remembered by fans here. Hollywood isn’t Hollywood without the film. Print it high, project it big. Hollywood Forever takes the film screening outside normal confines and into the outerworld with Cinespia. Recent offerings include the Robert Altman film California Split and Preston Sturges’ The Great McGinty. Legends live on at Hollywood Forever Cemetery. For more information, visit www.hollywoodforever.com.
Article posted on 9/19/2006
This article has been viewed 2495 times.