Could California get more conservative on crime and homeless issues this year? 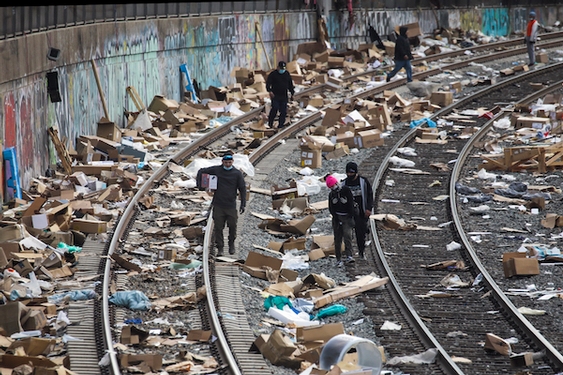 A whopping $45 billion budget surplus. Signs that we are (maybe, finally) rounding the corner on the coronavirus pandemic. Persistent, perennial problems like the sky-high cost of living and drought.

As Californians look deeper into 2022, what can we expect lawmakers in Sacramento to tackle this year? Is the Golden State, long a beacon of hope for progressives, set to swing more conservative as some residents demand a crackdown on crime and homelessness? Or will the fact that the pandemic showed just how interconnected we all are give new life to once-lofty ideas like single-payer health care?

Those battles will play out here as Republicans try to take back control of Congress and partisan issues like abortion and voting rights continue to roil the nation.

Where will California end up?

Jack Pitney, a Claremont McKenna College politics professor, thinks the state will remain, “in broad strokes, progressive, but with some relatively conservative streaks.”

Take crime. While some parts of the state have seen an increase in certain types of crime, statistics show California has not suddenly become a hotbed of criminal activity. And yet, the state’s politicians know voters have been inundated with a barrage of footage of retail robberies and, recently, miles of train tracks in Southern California littered with pilfered Amazon boxes.

“That can drive public opinion as much as the statistics do,” Pitney said, warning that “anything that goes wrong for California will be a video segment on Fox News.”

Gov. Gavin Newsom seemed to acknowledge as much in recent days when he lamented, “We look like a Third World country,” as he helped clean up railroad tracks in Los Angeles. In San Francisco, Mayor London Breed introduced a ballot measure that would expand police access to surveillance cameras as part of a bid to crack down on crime and rampant drug use in the Tenderloin and elsewhere.

Earlier this month, Newsom unveiled a budget proposal that called for more prosecutors and a new Smash and Grab Enforcement team to combat organized retail crime, along with grants for impacted businesses. The governor has also hinted, without providing details, that he plans on “leaning into conservatorships this year,” perhaps as a way to force mentally ill homeless people off the streets.

And yet the notion that deep blue California, where Democrats hold supermajorities in both the state Senate and Assembly, would abandon its progressive ethos entirely to return to being a tough law-and-order state is a nonstarter.

“I don’t see that as a priority,” said Melissa Michelson, a political science professor at Menlo College, who thinks more voters are more concerned about issues having to do with schools, housing costs and climate change than cracking down on crime.

Republicans did not succeed with the recent attempt to recall Newsom, and would-be moderate GOP lawmakers are stuck trying to appeal to a base that is small but still firmly Trumpian.

Pitney, a former Republican strategist who left the party after Donald Trump won the presidency in 2016, agreed that “at the statewide level, the problem is pretty dire” for the party.

With the budget surplus, lawmakers could choose to go big on one or two key issues — say, funneling massive amounts of money toward housing homeless people, or injecting cash into thorny water projects.

“There’s a lot of progressive impulse in California that in the past has been limited by lack of available funds,” Michelson said.

And, she pointed out, “we’ve got all these Democratic socialists in local government, so maybe that is the future.”

But for now, Michelson said, “there’s a limit.”

It’s backed by the powerful California Nurses Association, but faces steep opposition from deep-pocketed insurance companies and other business interests. Even many of his fellow Democratic lawmakers aren’t sold on the idea, and analysts say its chances for passage are low. The bill passed out of the Assembly Appropriations Committee, and is likely headed for the Assembly floor next week.

But it’s linked to a funding bill that calls for tax increases, which must pass by two-thirds and get approval from voters. Raising taxes while state coffers are overflowing? That’s a hard sell to voters faced with $5-a-gallon gas prices at the pump.

There’s also the chance lawmakers could sprinkle the funds around to various smaller projects. That could give lots of lawmakers something to take home to constituents, but the strategy also creates the risk that voters don’t see much meaningful progress.

Whatever they do, Pitney warned, lawmakers need to keep in mind that “when you spend the surplus, you are raising expectations those levels will remain in out-years when the revenues aren’t so flush.”

“But that’s not the way politicians think,” Pitney said, evoking former Gov. Jerry Brown’s constant warnings that revenues are volatile. “In making decisions, it’s not likely legislators will dwell on the biblical story of Joseph and the coming lean years.”

And, as the pandemic made painfully clear, there’s always the looming possibility that some unforeseen calamity will strike and suck up resources and attention.

“Some kind of disaster we’re not thinking of,” said Pitney, who lost his former Glendale home in a mudslide and then had to be evacuated from the 2009 Station fire. “There’s always the chance we’ll have the Big One.”

Local News
Healthy food is hard to come by in South L.A. These 3 activists are changing that
265 views

Local News
California will be ‘a beacon of hope’ for out-of-state abortion seekers, say leaders
272 views

Local News
Caruso donated to politicians opposing abortion in the past. Will that matter to L.A. voters?
300 views