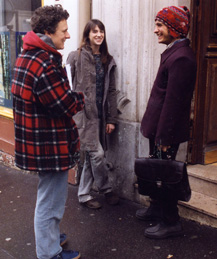 “Sometimes in real life there's a little bit of dream life,” says French director and writer Michel Gondry about his latest film , The Science of Sleep , in which dreams are the primary focus. “If you just go into a dream and you come out, sometimes those make the best movies. It was my goal to do a movie with dreams and how they interact with the way you live life.”

Whether it's directing Jim Carrey in Eternal Sunshine of the Spotless Mind or the Foo Fighters in their “Everlong” music video, Gondry's reoccurring obsession with characters in a dreamlike state is surely becoming his trademark. After winning an Oscar for Eternal Sunshine, Gondry has stretched beyond his cult status as award-winning video director for artists such as Björk, the White Stripes and the Rolling Stones, and now adds feature film director and writer to the mix.

In The Science of Sleep , Gael García Bernal ( Y Tu Mamá También, The Motorcycle Diaries ) has become Gondry's latest sleep victim. Bernal plays Stephane, a shy young man who falls in love with Stephanie, played by French actress Charlotte Gainsbourg ( 21 Grams ). Stephane is infatuated with Stephanie, but his insecurity and lack of experience make the love connection a losing battle.

“I had a really hard time imagining he would fit this rejection,” Gondry says of the characteristically good-looking Bernal, “so I had to push him into the mode of his plight. I pushed this side a little further because I was afraid that people would not understand why a girl like Charlotte would not be attracted to a guy like Gael.”

“One of the reasons is that he's a little insane,” adds Gondry. “He likes to say inappropriate things at the wrong time. It's like a contradiction to his shyness; like Tourette's Syndrome.”

Bernal was chosen for the role based on his ability to exude a “range of emotions that go from the really comical, to the very dramatic and even aggressive,” Gondry reveals. As an actor, Bernal developed his emotional range by playing a variety of characters, from a coming-of-age teen in Y Tu Mama Tambien (2001) to the young revolutionary Che Guevara in The Motorcycle Diaries (2004); all this was before he transformed into a transvestite in Pedro Almodovar's Bad Education (2004).

To play the role of Stephane, Bernal had to uncharacteristically step into the shoes of an ordinary man. Stephane is a graphic artist bored with his job at a Parisian calendar company. As a needed distraction from his reality, Stephane creates “Stephane TV,” a place in his mind where he can play director to his life, infusing grandiose dreams to his everyday situations.

“It's a parallel between what happens in real life and what happens with him with his dream of real life. I think many artists spend a lot of time developing their skills to compensate for their inability to reach out,” Gondry says of the typically shy, creative man. “You want to make an object that is an intermediary between you and someone else instead of directly talking to them. And ultimately,” he says, “you want to find a girlfriend.”

Stephane finds a connection with Stephanie after they spend time playing with his homemade inventions, such as a pair of glasses that show the world in 3D and a one-second time machine. “They bond with each other on a creative level in a way that nobody else can understand,” the director explains.

“From a guy's point of view, it should translate into a physical relationship,” adds Gondry. When fate doesn't work out that way, it's hurtful for him. From the girl's perspective, the fact that this friendship would be expressed in a physical way is hurtful for her because for it to become physical would ruin the friendship, something she found so precious.”

Stephane finally finds a connection with Stephanie after building imaginary sets and toys together. Their shared passion for creativity becomes their greatest hope for becoming a couple, but Stephane's insecurity continues to get in the way of their budding relationship. “Things will turn out all right if you'd just stop doubting that I love you,” Stephanie pleads.

Gondry's handcrafted animation is another one of his enduring trademarks. Using vibrant colors, childlike imagery and subtle humor, the director's animation is a refreshing escape from Hollywood's use of CGI images and special effects. Having 10 people work for over two months building the sets, Gondry created his dream sequences before he finished writing The Science of Sleep .

“We went to my countryside house and set up two cameras and two little sets. I built the turret with my cousin, who is an architect, just like when we were kids,” says Gondry, flashing the smile of a 12-year-old child. “I had to work around the dreams rather than the other way around. It made the film more interesting because it wasn't done in the typical way where the dreams follow the arc of the story.”

Another reoccurring theme in Gondry's work is the visual of a hand growing larger and larger, and then fighting the “baddies,” as Gondry calls them. So what, exactly, does the huge hand represent?

“It represents my penis!” jokes Gondry. “It comes from my own experience, really. When I was a junior in high school, I had this recurring nightmare where I would wake up with a feeling of having a huge hand. I believe it comes down to a connection of my brawn to my brain,” he explains.

With so much talk about daydreaming, one has to wonder if Gondry himself uses this technique to delve into his imagination for script or music video ideas. “A lot of times I am aware that I am dreaming and I do experimentation. I remember dreams when I'd go into a recording studio and change the quality of the song, put more treble, bass, or make it go faster. I guess it's interactive with the fact that I'm a director and I'm kind of directing my dreams,” he says, before adding an afterthought: “And I'm not trying to have sex with some ladies like most men do in their elusive dreams!”

The Science of Sleep releases in select theaters Sept. 22.