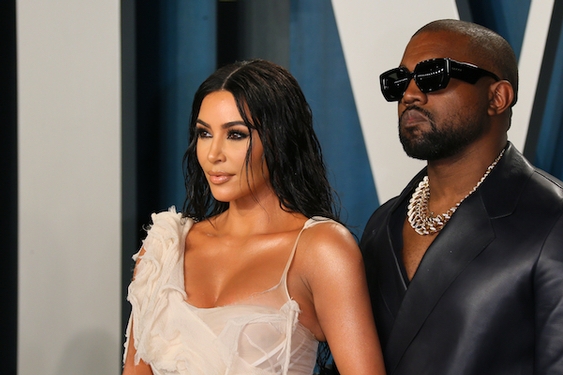 What goes up must come down.

Ye, aka Kanye West, proved that this weekend when he put up a couple more all-caps Instagram posts that were highly critical of estranged wife Kim Kardashian and then took them all down.

The rapper said Saturday that Kardashian had accused him of taking out a hit on her, then berated her Sunday for making accusations that could land him behind bars. “IM NOT PLAYING ABOUT MY BLACK CHILDREN ANYMORE,” he reportedly wrote Sunday.

The drama started Friday when Ye publicly complained about Kardashian allowing daughter North West to appear on TikTok “AGAINST MY WILL.” (North appears from time to time on the @KimandNorth TikTok account, which she reportedly can access only with Kardashian’s permission, via Mom’s phone.)

Kardashian responded with a statement that said, in part, “Divorce is difficult enough on our children and Kanye’s obsession with trying to control and manipulate our situation so negatively and publicly is only causing further pain for all.” She added that Ye was making a healthy co-parenting relationship “impossible every step of the way.”

She said she wanted to handle all further parenting matters privately. Ye, apparently, did not.

“I WANT TO BRING MY KIDS TO MY HOME TOWN OF CHICAGO TO SEE MY BASKETBALL TEAM PLAY FOR 7 THOUSAND PEOPLE AND KIM IS STOPPING THAT HOW IS THIS JOINT CUSTODY?,” he wrote Saturday on Instagram, per HipHopDX.

On Sunday he amped up his rhetoric, claiming in a lengthy and incendiary Instagram post, per Page Six, that “YESTERDAY KIM ACCUSED ME OF PUTTING A HIT OUT ON HER.”

Such accusations can get people locked up, the rapper stated.

“THEY PLAY LIKE THAT WITH BLACK MENS LIVES WEATHER [SIC] ITS GETTING THEM FREE OR GETTING THEM LOCKED UP,” he wrote. “IM NOT PLAYING ABOUT MY BLACK CHILDREN ANYMORE.”

There was more, per BuzzFeed, including screenshots of a conversation he said he had with “Kim’s cousin” about North. He also mentioned his own mental health and said Kardashian and her people “AS A WHOLE UNIT KEEP PLAYING GAMES WITH ME.”

“I TAKE MEDICATION,” he wrote. “MY DAD DIDNT HAVE MONEY OR A PIBLIC VOICE WHEN MY MOM DESTROYED ME AND HIS RELATIONSHIP I DO THIS IS FOR EVERY PARENT ON EITHER SIDE WHO’S KIDS FUTURES ARE BEING ONE SIDEDLY CONTROLLED I DONT EVEN HAVE THE RIGHT TO GET ANGRY AS A FATHER WITHOUT BEING CALLED ERATIC.”

But by Monday it was all gone. Kardashian had a photo of the gym on her Instagram Story, while Ye’s page was all business, declaring “Black Future Month” and promising the pending arrival of a new album, “Donda 2.”

A picture of Ye with three of his kids — posted by Jason Lee of Hollywood Unlocked at the rapper’s “The Future Brunch” event Sunday in L.A. — might have had something to do with it, along with video of Dad and his three youngest children that was posted online. (The brunch, attended by more than 50 Black journalists, was followed by a performance of Ye’s Sunday Service.)

Representatives for Ye and Kardashian did not respond immediately to requests for comment Monday.

Kardashian spoke out in December about North accessing the TikTok account without parental permission, giving a tour of their home and then interrupting her when she was lying in bed. Kardashian shut down the live video as soon as she became aware, and talked to interviewer Bari Weiss about having rules for North.

Weiss noted that Kardashian had broken rules all the time, especially when it came to social media. "[W]atching her go live and you say, ‘It’s not allowed,’ I asked myself: Isn’t it inevitable that she’s going to do with the newest media what you once did?,” Weiss said.

“I mean, North West is Kanye West’s daughter. Forget that, she’s his twin. So she will still definitely do all of the above,” Kardashian said. “But in my household, there are rules. She did feel really bad about that, and she apologized to me and she said, ‘I saw on TikTok that I got in trouble and I’m really sorry.’ And she got it.”