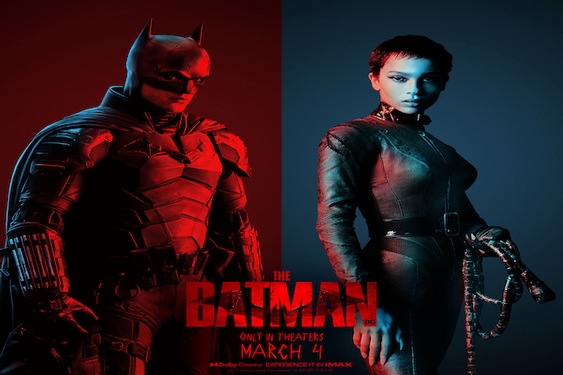 Robert Pattinson, left, is the Dark Knight, and Zoë Kravitz is Catwoman in “The Batman.” (Sony Pictures/TNS)

Zoë Kravitz “interpreted” her character in Matt Reeves’ “The Batman” as bisexual, finally bringing a long-present detail about Catwoman to the big screen.

After flirting around it for years, Selina Kyle was notably established as “canon bisexual” in a 2015 run of DC’s “Catwoman” comics. Writer Genevieve Valentine and artist Garry Brown did it with a kiss between the character and another woman taking up the Catwoman mantle, explaining at the time that her bisexuality “wasn’t a revelation so much as a confirmation.”

But Selina’s sexuality has not been an explicit part of her character profile when adapted for “Batman” TV shows and films, in which she has been famously played by Eartha Kitt, Michelle Pfeiffer, Halle Berry and Anne Hathaway over the years. Those projects portrayed the Gotham City burglar as a heterosexual woman whose tete-a-tetes with Bruce Wayne’s Batman stoke sexual tension in the story.

In Reeves’ version, Catwoman is still a romantic foil to Robert Pattinson’s Caped Crusader. But a specific scene also shows the nightclub waitress calling her friend Anika “baby” while searching for her in her apartment. The affectionate term got some wondering if it was a nod to her comic-book backstory, even though Anika also is referred to as Selina’s “friend” elsewhere in the film.

So Matt Galea, a senior entertainment editor for Australia’s Pedestrian.tv, asked Kravitz directly if the “baby” mention in the latest Warner Bros. film was an intentional reference to Selina’s bisexuality.

Kravitz, 33, agreed: “That’s definitely the way I interpreted that, that they had some kind of romantic relationship,” she said.

Director Reeves backed her up by saying that the film is “very true to the character” of Selina Kyle, who, he explains, is not yet Catwoman in his adaptation of the comics.

“But all the elements of how she’s going to become Catwoman are there. And in terms of her relationship with Anika, I spoke to Zoë very early on and one of the things she said which I loved was that: ‘She’s drawn to strays because she was a stray,’” he said, explaining that Anika is “like a stray and she loves her.”

He added: “So I don’t think we meant to go directly in that way, but you can interpret it that way for sure. She has an intimacy with that character and it’s a tremendous and deep caring for that character, more so than a sexual thing, but there was meant to be quite an intimate relationship between them.”

Reviews have been generally positive for Pattinson’s first outing as the DC vigilante. The film has an 87% “fresh” rating on Rotten Tomatoes. And although The Times’ Justin Chang called it “artful and restrained,” he also said that the film “may struggle to justify its existence.”

“The Batman,” which hits theaters Friday, sees Bruce and Selina team up as “the bat and the cat” to take down Paul Dano’s Riddler. The film is expected to test audiences’ appetite for an even darker Batman than Christopher Nolan’s version of the character in “The Dark Knight” trilogy, as well as whether fans will return to theaters during the COVID-19 pandemic.

Blog
Ray Liotta, star of ‘Goodfellas and ‘Field of Dreams,’ dies at 67
47 views

Blog
"Breaking Bread" screening at Q&A at the Skirball Cultural Center on Wednesday, May 4
314 views

Blog
The slap heard around the world: Will Smith really did hit Chris Rock at the Oscars
293 views