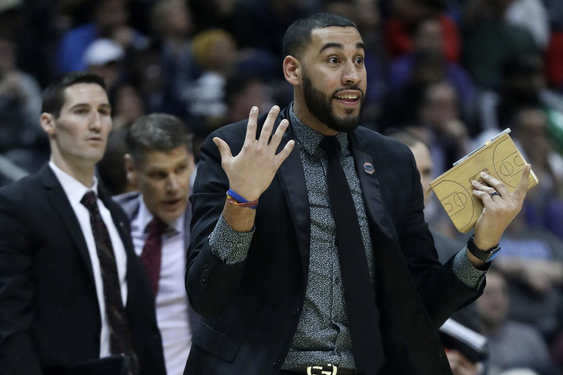 n this photo from March 24, 2018, Loyola assistant coach Drew Valentine reacts during an Elite 8 game in the NCAA tournament against Kansas State. On Sunday, March 6, 2022.

There will be no sneaking up on anyone this time for Loyola.

Under 30-year-old first-year coach Drew Valentine, the Ramblers earned their second straight NCAA Tournament invitation — and their third in five years — with a 64-58 win over Drake in the Missouri Valley Conference title game Sunday in St. Louis.

The Ramblers (25-7) overcame a horrid start to outlast the Bulldogs, who were victimized by poor shooting from the field (35.6%) and the free-throw line (11-for-18).

The Ramblers entered the conference tournament seeded fourth after finishing the regular season in a three-way tie for second, then cruised to wins over Bradley and regular-season champion Northern Iowa before holding off Drake.

Loyola advanced to the Final Four in 2018 and went to the Sweet 16 last year in the final season under former coach Porter Moser.

Loyola wasn’t at its best Sunday, committing 16 turnovers and at one point having more turnovers (eight) than field goals (five). The Ramblers led by nine with 4:27 remaining when the Bulldogs went on a late run, pulling within two at 55-53 with 1:44 left.

Uguak made four big free throws down the stretch, but two misses by Marquise Kennedy with 31 seconds remaining kept Drake’s hopes alive. Ryan Schwieger’s two free throws with 15 seconds left sealed it, and the Ramblers danced off the floor in their final MVC Tournament game.

Loyola is leaving for the Atlantic 10 Conference in July.