March Madness is nearly here, and UCLA is ready to go dancing 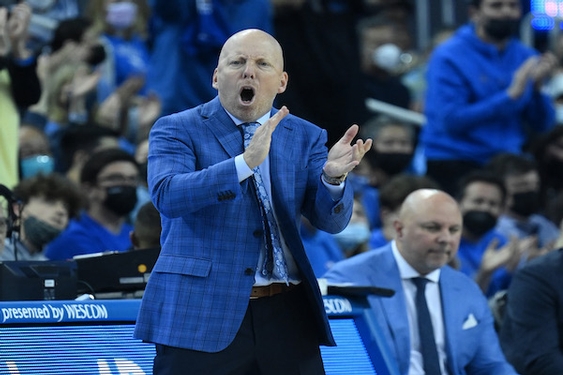 For a UCLA team that has waited a year for the return of the magic, the familiar signs were everywhere.

On a sizzling Saturday night at a rollicking Pauley Pavilion, the calendar roared and the heat rose and the message was clear.

March is back. The dance is coming. The Bruins are ready.

You could hear it from the floor, above the din, the hardwood pounding with bodies and bluster in a 75-68 victory over USC.

"I think we are ready," Jules Bernard said.

You could feel it in the body language of a team that has been in these situations again and again, Jaime Jaquez Jr. firing, Tyger Campbell diving, the Bruins racing to a 13-point lead and then holding on for a breathtaking finish.

"I'm excited," Jaquez said. "It's time to turn it up into another gear."

And you could see it in Mick Cronin, in his grimace, in his shrug, the UCLA coach wearing his game face long after the Bruins broke a five-game losing streak to the Trojans.

"I'm tired, it's late, I'm hungry … we didn't finish the game, I wanted us to finish the game," said Cronin, who beat USC for the first time as UCLA's coach. "We should have won by double digits."

The wonderfully grumpy Cronin was right. A Bruins team that was blowing out USC with 5:49 remaining almost blew the game with late missed free throws and defensive mistakes. The resilient Trojans pulled to within a basket with 1:22 left, at which point Cronin admitted he nearly lost his mind.

But win, they did, and Jaquez glowingly pointed at the filled and bouncing student section, and Clark outdid him by running into the middle of all those kids and, yeah, the Bruins' victory was far more conclusive than its finish.

Bottom line, UCLA really did look ready to resume a March journey that last year led them to the precipice of a national title.

Despite a dizzying array of passes in an unselfish scheme that featured 15 assists, the Bruins offense committed just one turnover, the fewest in the program's recorded history.

Despite playing with leading scorer Johnny Juzang still hobbled by an ankle injury, they compensated with 27 points from Jaquez, 19 points from Bernard, and a patient interior push that allowed them to win despite hitting just three treys.

Despite losing three of four games in early February, the Bruins have started a trademark Cronin late-season run, having won six of seven while ranking among the nation's top 15 in both offensive and defensive efficiency. They thus enter this week's Pac-12 tournament with a No. 2 seed and a mandate to simply get healthy and stay healthy.

"If we get everybody healthy … we're close," he admitted. "We're close, and if we won this game by double digits, I'd think we were there."

Juzang is the one whose injury is the most worrisome — he made just four of 13 attempts and seemed totally out of rhythm Saturday — but Cronin sounded carefully optimistic.

"He's far from ready … but he will be, hopefully," Cronin said.

One thing Cronin did admit should strike fear into any future dancing partners. That great defense from last March? It's better than ever.

Clark has become a relentless force. Transfer Myles Johnson has become a sturdy rim protector. The rest still defend hard on every possession.

"We are a better defensive team ...we're much better defensively," said Cronin, who added a word of warning, noting, "I will say this, as Coach [John] Wooden says, the past doesn't predict the future … the work we put in will determine what we do in the future … what happened last year in March has nothing to do with it."

Ah, but after all that grumbling, he finally gave in.

"If we can execute at a high level, I like our chances," he said.

One can't blame him for being cautious.

This season was supposed to be a joyous sprint.

Instead, it has been a solemn trudge.

The Bruins showed up last autumn amid the highest hopes in recent program history. The buzz was deafening. The historic Bruins greatness was back. They were returning everyone from a team that danced through a miracle run last March, losing only in the national semifinals to Gonzaga in overtime on one of the greatest shots in NCAA tourney history, a 40-foot bank by Jalen Suggs.

They were supposed to enter this March as one of the best teams in the country. Instead, they aren't even the best team in their conference.

They were supposed to be good enough to avenge their heartbreaking loss to Gonzaga. Instead, back in November, they lost to the Bulldogs by 20.

Juzang was supposed to reinforce his decision to stay in school by playing like an NBA first-round draft pick. Instead, he struggled with injuries, a positive coronavirus test, and an inability to make marked improvement on defense.

Peyton Watson, their gifted five-star recruit from Long Beach Poly, was supposed to make the Bruins more versatile and athletic. Instead, he's only been good enough for limited minutes, and he didn't even play against USC on Saturday.

All these are problems, but now it's March, and nothing else matters but March, and the Bruins are ready for the madness.

"We know it's a tough road; we've been there before," Bernard said. "We know how hard it is to win in those environments. We're definitely focused and locked in."

Juzang sounded eager for the craziness to begin.

"When we get into March, that's the real deal, that's do or die," he said, almost gleefully. "We're not there yet but … we're getting there."

Watching them bruise and baffle USC on Saturday night … oh, they're there.