This Providence: Staying on the Straight and Narrow 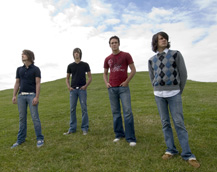 The members of This Providence are still young by all accounts, but they've already got a pretty good idea of who they are, where they want to go and how they're going to get there. While people may hear certain adjectives used in describing them and jump to their own conclusions, bassist Phil Cobrea, guitarist Gavin Phillips, drummer Ryan Tapert and singer-guitarist Dan Young have already decided that whatever anyone thinks about them, they're going to change their minds.

“Signing to Fueled by Ramen, we've had people expect certain things out of us,” says Young, “but ever since we've been a band, we've always wanted to stretch ourselves musically.”

Just to be fair, though, he doesn't hesitate to call his band's music what it is either. “It's a pop album but we definitely wanted to make it have integrity musically too,” he says, adding, “We write music that we like.”

As one of the latest “it” bands from the current “it” label, the foursome has had a quick introduction to being in the spotlight and is feeling the effects, both positive and negative, finding just as many eagerly devoted fans as willful detractors.

“It's definitely weird and it's hard to take criticism sometimes,” says Young. “I read a review the other day and it really bummed me out, but at the same time I've gotten e-mails from people where I had no idea my songs could mean that much to people. It's worth the criticism.”

Though he may still take things to heart, Young shows that it's more due to a commitment to hopefully having a positive impact on listeners than a youthful attachment to his own work. “We have a message that we're trying to bring to people who listen to our album, and it's not just, ‘I had a bad day so I'm going to write a song about it.' There's more to it than that,” he says. “A lot of it is about our faith, how we go through our lives with that faith and how we want to share it with everyone.”

While this attitude may fuel said detractors and leave the band vulnerable to even more generalizations, Young and his band mates aren't the types to hold their words just for that.

“Everyone has been really accepting of it and we do get a lot of respect from all our fans,” Young adds.

And citing influences ranging from Ryan Adams, Saves the Day, Tom Petty and the Faint, maybe all those anti-pop purists will add to those numbers.

“I think that's why when you listen to the album, there aren't any songs that sound the same, because there are multiple people listening to so many different things,” says Tapert. “Pull this from here, pull that from there, put it all together and come up with a CD.”

Of the tracks on their new self-titled album, Young has a particular affection for one titled “… But What Will They Say?”

“The song is actually about how people will perceive the album,” he says. “It was kind of difficult for me to write, but that's why I like it, because of the challenge.”

If Young likes a challenge, he picked a good place to start, but if he has his way, soon enough there will be a lot of people singing his praises.

This Providence's self-titled album is currently available. The band will perform Nov. 16 at the El Rey Theatre, in Los Angeles and Nov. 17 at Chain Reaction, in Anaheim. For more information, visit www.thisprovidence.com .