Matthew Jacobson was on the case, but even he didn't know how special last week's Jack White concert at Detroit's Masonic Temple would end up becoming.

Jacobson is the artist who designed the commemorative posters for White's two shows at the Masonic over the weekend. At first glance, they look like they're just White's name and the show's date. But look closer: Jacobson chronicled the day's events both on a local and worldwide level — everything from fans purchasing White's new album at Third Man Records in Detroit to the score of the Tigers Opening Day game to Russian bombing in Ukraine — and spelled them out in the poster's background.

The biggest news, at least in the world of Jack White, would happen after his deadline. Friday night's show saw the hometown rocker pop the question to his girlfriend, singer Olivia Jean, and then turn around and marry her — all on stage in front of a shocked Detroit crowd — just minutes later.

That part didn't make the scroll. But because of the circumstances of the concert and the place it now holds in Jack White lore, Friday's posters are a hit with collectors. Jacobson sold out of his entire run — 300 at the show, and 100 more on his website at $60 a pop — and several have sold online for between $250 and $300, with one eBay auction closing Tuesday at $580.

"I feel it’s a great memento of that day," says Jacobson, a graphic designer and former Third Man team member who was raised in West Bloomfield Township and now lives in Chicago. "It’s got the date large, a date that is of the utmost importance to Jack and Olivia. And for the fans that were there, this is meaningful."

Jacobson pitched his concept to White's team after the tour was announced in December. He has done posters for around a dozen White concerts in the past, including a 2015 keepsake for a Las Vegas show that includes a scratch-off element.

Jacobson figured his biggest coup would be getting the day's Tigers score on the poster. As it turns out, there were other brushes with fate which helped add to the magic of the day and its souvenir.

The first words on Friday's poster are "Olivia woke up with 'What's the Trick?' stuck in her head," a reference to Olivia Jean, and one of the songs on White's new album "Fear of the Dawn," which was released that day. Jacobson had gone back and forth with a few different configurations of the opening line, and ended up swapping in the Olivia reference at the last minute. The final line on the poster is "Jack White played his first of two shows at Detroit's Masonic Temple," so it begins with Olivia and ends with Jack.

Along with his wife, Leigh Jurecka, who tag-teamed with him on the project, Jacobson spent the day Friday driving around town, collecting tidbits, as well as checking for national and world news. (A video accompanying his day-in-the-life exploits, edited by Jurecka, was shared to White's social channels.)

He wrapped the poster design at around 5:30 p.m., slightly behind schedule, and shot it over to Dunwell Dry Goods in Hamtramck, which printed them and dried them using a series of jerry-rigged box fans. The posters were individually numbered, and Jacobson, pressed for time, called on two pals whom he hadn't seen in 20 years to help him number them.

A series of fans dry posters at Dunwell Dry Goods in Hamtramck before they're shipped to the Masonic Temple.

He arrived to the Masonic with completed posters in hand by 8 p.m., at which point fans had already been waiting in line for several hours. (White fans tend to be ardent collectors.) Jacobson sat at the merch table and signed and personalized posters for fans, some of whom were still in line when White took the stage at just after 9:30 p.m.

Rich Shappee of Oxford got his hands on a poster after ducking out of Friday's concert four songs in and hitting the merch table. "At first glance, I saw it hanging and all I saw was a bunch of words, and I didn't get why everyone thought it was so cool," says Shappee, 44, a longtime fan of White's and a poster collector. "Then I saw it was an actual time capsule of the day, and it even had the score of the Tigers game on it. That made it super cool and unique, especially with what Friday ended up being."

After selling out of the night's run of posters, Jacobson left the show early, and it wasn't until the next morning that he heard the news of the engagement and the surprise wedding.

That update opens Saturday's poster, which starts, "Jack and Olivia woke up married." He again spent the day combing for news on a micro and macro level — it was a slower news day, so the process was a bit more tedious, he says — and went through the particulars once again.

Jacobson, 50, found the process of working within his self-imposed limitations exhilarating.

"Thursday night when I drove into town, these posters didn't exist," he says. "So when I drove home on Sunday morning, I felt like I had accomplished something." 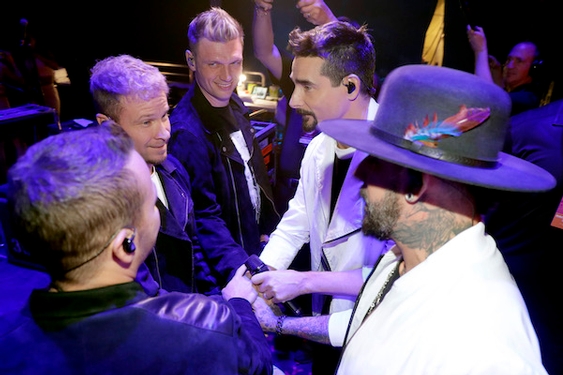 Music Report
From Saweetie to the Linda Lindas, this fall's must-see music fest could be Head in the Clouds
1,420 views