Once homeless, UCLA's Zaylon Thomas makes his mark on the track 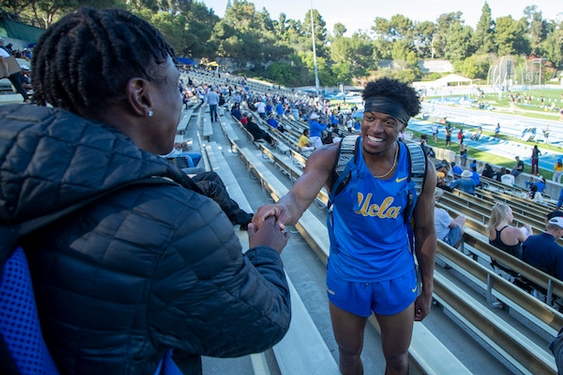 The same question haunted Zaylon Thomas when he was a teenager trying to get to high school as a senior preparing for graduation and a promising athlete looking for his next option.

The UCLA sprinter and high jumper is still asking himself that when he has seemingly everything he could want. The sophomore attends his dream school. It's surreal to sit in the stands at Drake Stadium and marvel at a postcard-worthy view of UCLA's campus. Yet he remains consumed about envisioning his next steps.

Focusing on what's next will keep him away from what once was.

Thomas battled homelessness starting in eighth grade, crisscrossing the country with mother Wanda McKinney. Living in three states in five years, Thomas doubted whether he would graduate from high school. Now he's dreaming of leaving his mark at UCLA.

Despite almost no formal training in high school, Thomas now competes in the 200-meter and 400-meter races, 400-meter relay, high jump and long jump. In January, he helped UCLA's 1,600-meter relay team produce the fourth-fastest time in school history with a time of 3 minutes, 9.65 seconds at the New Mexico Team Open.

Thomas opened the outdoor season on March 26, running the 200 at the Rafer Johnson/Jackie Joyner-Kersee Invitational. McKinney, flanked by her father William, Thomas' older brother Xarius and his cousin Sheaun, threw her arms in the air when Thomas crossed the finish line with a heat-winning time of 22.32 seconds. It was the first time she got to watch him compete in college.

"It was quite the journey," McKinney said.

The relocations started when McKinney lost her job. The bills piled up. The electricity got cut off. They couldn't stay in their Sacramento home anymore. McKinney tried to start over in Maryland, where she hoped to start a business with friends.

When that failed to take off, McKinney sent her son back to California to live with his grandparents for a year. But he missed his mother and asked to be with her.

Thomas is a mama's boy, McKinney said. They found refuge in homeless shelters, hotels and friends' houses. They occasionally lived out of their vehicle, braving cold Maryland nights, showering in public gyms and selling almost every item they had. Sometimes, they still didn't have enough money to buy a gallon of gas.

Through daily challenges, the bond between mother and son was consistent. When they had little else, having each other was enough.

His mom is "the best person in the world to me," Thomas said.

Thomas' raw athletic ability helped him excel in any sport he tried, but without structure he lacked confidence, said McKinney, who is on track to open a counseling facility this year. He dabbled in basketball and football, Thomas' first love, but didn't start track until his senior year of high school when he and his mother relocated to Nevada.

Track coaches at Las Vegas Centennial High knew Thomas was a gifted athlete and tried to get the basketball prospect to give running a try. He didn't listen until he realized kids on the track team were getting college scholarship offers. It could be his way out.

Two months after starting from scratch, Thomas won the Nevada Class 4A state championship in the high jump, clearing 6 feet, 5 inches in the state final. He was an explosive sprinter — though he gave up the 100-meter dash after he slipped out of the blocks during his first meet — and had a personal best of 48.77 seconds at 400 meters.

Thomas' performances in the quarter-mile race caught the eye of UCLA assistant Curtis Allen. He was recruiting at a meet in New Mexico when he watched Thomas go from sitting on the sideline on a cold day to running the 400 less than 15 minutes later, a nearly unheard-of feat for a race that usually requires ample warmup time.

Allen knew the kid had talent but he wasn't sure if he had the grades.

When Thomas introduced himself and sent Allen his transcripts, the UCLA coach noted passing grades in classes like biology with failing marks in gym. He asked about the disconnect.

Each year in school was like a restart, Thomas told Allen, meeting new people in a new school with new teachers as he and his mom moved from state to state. Getting to school proved challenging some days. He had four outfits and three pairs of shoes for an entire school year, trying to mix and match combinations as best he could so his classmates wouldn't catch on.

"It was hard to get to school sometimes and then when I was at school, it was hard to focus because I didn't have much," Thomas said. "It was just hard trying to act natural at school and be a normal student."

Following advice from Allen, Thomas went to junior college. Allen told him that if Thomas got his academics in line, they could start the recruiting process for him to transfer to UCLA.

Facing yet another new school in a new state, Thomas enrolled at College of the Sequoias in Visalia, Calif. But he was close to getting kicked out, he said, until athletic director Brent Davis and school president Brent Calvin intervened to get him a second chance.

In Thomas, Davis saw a good kid who was put in a bad situation. He was "extremely intelligent," but guarded. Instead of rushing Thomas onto the track, Davis knew the first step was just to get Thomas to start trusting the school faculty, coaches and administrators. Davis and track coach Kenny Jackson thought it was best to not have Thomas compete in his first year as he focused on academics.

Instead, he joined a work study program, cleaning up stadiums and arenas after sporting events.

Homelessness forced Thomas to grow up quickly, he said, but the threat of squandering a chance to go to UCLA by not following through at junior college forced him to mature.

"If I mess up this opportunity, nobody's going to want me," Thomas said of his thoughts at the time. "It definitely was another wake-up call for me to get my head on straight and stay focused if I really wanted to come to UCLA."

Allen had laid out similar paths for other promising prospects in his coaching career, but many never followed through. He was hoping Thomas was different. In a year, as promised, Thomas sent Allen his transcripts and it had all A's and B's.

"Once he got it done, I could see that he wasn't just an average kid," Allen said. "He was a really motivated kid that wanted to be successful, wanted to be great, wanted to do something positive in this world."

Thomas' junior college track career was limited to just two meets after the pandemic struck in 2020. He high jumped 6-8 3/4 in his college debut while he stayed on track to transfer to UCLA.

Now a sophomore at UCLA, Thomas has had only one full track season in his career. His natural athleticism oozes off his lean, muscular, 6-foot-5 frame as he rounds the corner of the track or leaps over the bar in the high jump. Thomas comes early to practice several times a week to fine tune technique that will take him higher and make him faster.

Thomas has decathlete athleticism, Allen said, but where he can help the Bruins the most is in the high jump and 400.

The quarter-mile race is one of the toughest, Allen said. That's why Thomas is perfect for it because he's always pushing toward what's next.

"You have to have a beast mentality," Allen said of running the 400. "Some of the different turmoils and things he went through in his life, I think it makes you relentless and it makes you never want to give up." 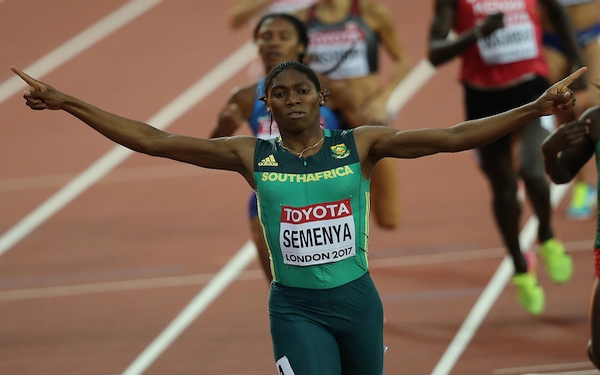