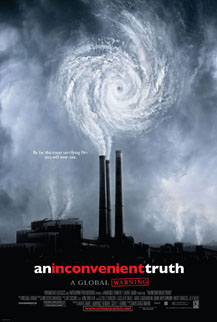 The popular Santa Monica Drive-In at the Pier series wraps up its 2006 season on Sept. 26, with a special “under-the-stars” screening of this year's potent political documentary, An Inconvenient Truth . The film, directed by Davis Guggenheim, tracks ex-vice president Al Gore's nationwide campaign to inform people about the long- and short-term effects of global warming.

Gore himself has a long history as an environmental advocate, and this film – which has proven to be one of the top-grossing documentaries to date – presents a wide scope of facts and information for the viewer to think about and, in the end, draw his or her own conclusion. While somewhat monotonous at times – after all, some parts of the film just feature Gore himself lecturing – the film has proven to be a must-see, mostly because of its immediate importance.

Doors for the event open at 7 p.m. and the screening begins approximately at 8 p.m. Donations are encouraged, with money going to support Arts Fighting Cancer. Refreshments are available for purchase, and comfy folding chairs (or you can bring your own) are available to rent for $5.

For ticket information and other details, visit www.smff.com.