Westside Bar Guide: The ins and Outs of Westwood's Wasted 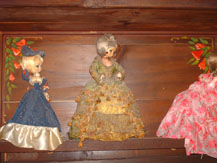 Westwood is a big insular plastic bubble. If you are a UCLA student without a car, or without a friend who has a car, your world is largely confined to Wilshire to the south, Veteran to the west, Sunset to the north and Hilgard to the east.

You could easily spend your four years there without ever actually sampling the goods of one of the world's greatest (or worst) cities, which lies just down the street. While this circumscribed little area is pleasant enough to begin with, it can (and will) seem stifling.

With hopes of avoiding the pangs of such isolation, we present this little bar guide; for those daring enough to take a five minute cab ride down Wilshire into the wilds of West Los Angeles. These bars all have easy accessibility from the Westside, to make it as easy as possible for you to join a social world beyond the red cups and sticky apartment floors of Westwood.

Hell, we even threw in advice and anecdotes so that you can get a flavor for the kind of things likely to happen at these bars. So, my little UCLA butterfly, emerge from your cocoon, spread your margarita wings and whisky antennae and fly, fly!

Just because you've finished college doesn't mean college is finished with you. In this prototypical West L.A. poolhall and drinkhole, you'll reunite with all those people from those college parties (the parties everyone is so over now) sporting slick shirts bought with their investment banking money instead of the flip flops and backwards caps of yestermonth.

Reasonably priced ($6 to $8 a drink) and appropriately plastic, if you can't work up the chemical courage to buy some long-legged insurance adjuster a drink you can fix your eyes on the 20-foot pyramid of flat screen televisions surrounding the broad sides of the main bar.

Author's advice: Get a friend who is an investment banker or business-something and have him start all the conversations; then you can jump in as the mysterious dude who doesn't relate to the strange world of business. It's a variation on good cop/bad cop that is sure to get a woman in a business suit to buy you a drink.

Bringing third world intoxication to the heart of the first, Cabo Cantina sports all kinds of drink specials and a semi-outdoor patio. Naturally, the specialty is tequila, and they run the gamut, from Patron at the top, to cat-urine at the bottom – just like the real Cabo (j/k)!

When packed the sound system will bleed your ears, and the bar will bleed your wallet. But if you can't hold a conversation, no te preocupes – hay otros diversiones! Por ejemplo , just check out the airbrushed murals of wasted spring break bros and inhumanly endowed bikini hos.

The hos all seem to have err … ‘el bulge' south of the border, and for some reason it's OK for the cantina to have on their left entrance wall a Mexican bartender depicted with the ethnic sensitivity of, well – young drunk Americans in Mexico. It's hard to say if the place is fun because of these things or in spite of them.

Author's advice: Don't order a Corona thinking you're going to be taking it easy; they only have it in the huge bottle size.

Dive into one of the dankest, grittiest (relax Westside gritty, not skid row gritty), little slosh parties on the west side. A barely lit room encased in sweaty brick, it still manages to be one of the best, and most supportive karaoke venues in the world, sporting binder upon binder of forgotten yesteryear hit.

Something about the pattern of the radio shack disco lighting does this time-warp-seizure thing to middle-aged women, who always end up forgetting their kids and their crap receptionist jobs and go into full on 1987 skank mode.

Drinks are strong, and the dance floor allows for some of the dirtiest grinding this side of a gypsy Starbucks. The sign out front says “If you were here, you'd already be home,” but if you're making the Gas Lite your home, chances are you're just homeless.

Author's Greatest Moment Here: When I was 19, this was one of the first places where I attempted to use my fake ID. When I got inside I came to the realization that I now had to pay for my own drinks, a first inkling of real-world adult responsibility. This was like my second Bar Mitzvah – I felt like a man.

Boston inspired, and Bostonian-inhabited, this beer and wine bar is a welcome reprieve from the swank neon imposition of surrounding options. Just don't you dare say anything bad about the Pats or the Sox, unless you want to learn how beat downs are handed out in Beantown.

The bar food is surprisingly passable, and with darts, a pool table and one of those internet jukeboxes to help you impose your musical tastes on others, it's a good place to meet all the ‘real' people who are just as jaded by all the ‘lame L.A. bullshit' as you.

Author's Advice: If they have it on tap, get a pitcher of Boddington's. It's like if Newcastle mated with Guinness and their child was some smooth honey-malted messiah.

This is it kids, a bar so college oriented it boldly declares itself as ‘On Campus' even thought it's clearly a mile from any campus building. Maloney's gets away with this because of a series of general education classes it conducts from its darkened and deafening fishbowl confines.

It is also easy to forgive any bar where you can buy a stein; the beer equivalent of a big-gulp. Class offerings include “Masculine Masochists: The Psychodynamics of Frat Fights,” “Marking Time with Torture: 21st Birthday Alcohol Rituals in Undergraduate Populations” and perennial favorite “Dangerous Triangle: Understanding the Relationship Between Low-Self Esteem, Substance Abuse and Promiscuity in College Aged Women.”

Author's Dumbest Moment Here: Screwed into the walls are portraits or posters of various actors and stars. There was a huge Mick Jagger poster screwed into one of the doors, and at one point, a friend and I decided to try and steal it for our apartment.

It was crowded enough for my friend to pry it off the wall, but when we reached the exit, we realized that one of us would have to make a break for it past the security, effectively making it the last trip to Maloney's for one of us.

Instead, we just left the portrait by the door. Giving up Maloney's would have been like giving up an opposable thumb; an absolute necessity.

For UCLA's near graduation set, the Westwood Brewing Company (pronounced ‘Broo-Coe') is a beer garden of Eden, an extensive multi-floored venue that can boast three separate bars, a karaoke/live band room, and another room dedicated to some of the lamest (but cheapest) stand-up ever.

Most nights of the week feature a drink special of some sort, so if you're committed to your boozing, you could feasibly taste five or six different flavors of hangover in a single week. Thursday is Westwood's official party night.

Author's Greatest Moment Here: After a tough break-up, I try and get through the pain through karaoke on a crowded weeknight. My rendition of “Everybody Hurts” by REM receives a warm response, and is the first step on my road to healing. Not a dry eye in the house.

Sepi's isn't really a bar, it's more of a sandwich shack that sells pitchers of beer. Although the sandwiches are mediocre, the pitchers are cost effective, and you can probably get a good base tan going in there with the UV rays emitted from all the neon beer signs.

This is the ideal place to watch a sports game in Westwood; with its mixture of homeless, alumni alcoholics, frat guys and Chili's kitchen staff on break (never even try to take any of these guys on at foosball), it's a good place to be yelling drunkenly. There are beer promotions aplenty, so find the right night and drink yourself happy.

At one point one of my roommates and another friend were working at Sepi's at the same time, so Sepi's became kind of a satellite apartment, filled with beer and homeless stink (just like our apartment), but always stocked with food (unlike our apartment).

An oddly laid out pathway of rooms, bars and patios, Renee's is the Q's for the less uptight set. Instead of all the flat screens there are a bunch of paintings (the Gustav Klimt rip in the first bar to the right is a personal favorite), and instead of pool tables there's this room with a bunch of weird dolls in it.

Author's Dumbest Moment Here: I was on a date, and when we got our drinks we ended up sitting in that weird room filled with all the antique dolls. Nothing salts your game quite like the creeping shadows of childhood horror watching your every move as you're about to put a really well considered and admirable spin on the politics of gender in this country since the 1960s. It was like trying to make out in a haunted preschool.

If you're a hot chick (hot of course, being an attitude) expect random guys to try and grind with you on the dance floor, do their best to wow you with their foosball skills and woo you with their conversational skills in the back room. The fact that there's a cover on weekends seems kinda ridiculous, but in light of Busby's providing a three step cure to abstinence, it's hard to blame them.

Author's Dumbest Moment Here: Saint Patrick's Day 2006. Irish car bombs are deemed the necessary way to pre-party, and before we get to Busby's, someone has the bright idea that maybe we should get 40s from the liquor store next door and drink them in the alley across the street “just to make sure” … of what, I don't know. One of us tries to actually open the 40 in the liquor store and start drinking it right in front of the counter; much to the angry disappointment of the store's proprietors.

After 20 minutes inside, one of the girls we came with is passed out, and security is asking us to get her out of there, so I have to drag her corpse out the back exit as she's babbling and knocking into people before she starts puking on the street. The worst part is I'm not even Irish.