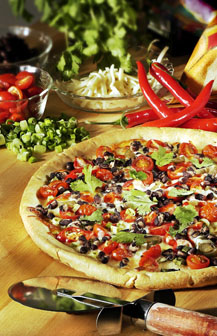 Too often I despondently glare at the puddles of grease that unabashedly float on top of the bland, burnt, sorry excuse for pizza sitting in the cardboard box that's flopped on my beer-covered coffee table. Gnawing on a paper plate too frequently sounds more appetizing.

Admit it: most pizza sucks. However, the City of Angels is home to some of the best slices outside of Brooklyn. You just need to know where to look. Which brings us to ... this sexy little pizza guide. Read It. Use it. Learn to love it. And for God's sake, take home leftovers for the morning after.

WILL SACRIFICE A VITAL ORGAN FOR A SLICE FROM THESE PLACES:

It's probably the most famous pizza in Los Angeles. Even if you've never eaten there, you've probably heard of Mulberry Street and the superstar clientele it's famous for feeding.

With one location on Beverly Drive and the original on Canon Drive (both in Beverly Hills), it's no surprise that these slices end up adorning the insides of Hollywood's hottest celebrities. It's the only pizza with an image.

The fluffy, ingredient-laden slices are geared for the more adventurous pizza connoisseur. The Pizza Con Funghi rocks several different types of mushrooms including shitake and porcini, and balances nicely with the light, airy crust. However, if you're hankering for greasy, sloppy, cheesy madness, Rustica probably isn't the spot for you.

Venice is a unique beachside town to say the least, so it's only logical that a town as eclectic as Venice should have pizza to match. Located on funky Abbot Kinney Boulevard, Abbot's is a standing-room-only pizza joint nestled among one-of-a kind clothing and furniture stores.

Famous for their bagel crust, the tequila-lime chicken pizza is simply the best. With fresh slices daily and an assortment of toppings and crusts, Abbot's is the most fun you'll have with pizza in all of L.A. There is a second location on Pico in Santa Monica, but for the genuine experience wander out to Venice.

Late night munchie orders to-go? New York style slices at 5:47 a.m. Located on Fairfax across from Canter's, Damiano's is one (if not the only) place in L.A. that will deliver until 6 a.m.

Damiano's boasts awesome, thin crust that isn't too crispy. They also have a vegan pizza with Follow Your Heart “mozzarella” for pizza-loving herbivores. However, it is New York style pie at its best, so be prepared for some grease.

A famed NY style pizza parlor, Village offers some of the best Brooklyn style pies in Hollywood. The crust is thin and pliable again for the NY necessity of folding. The sauce is right-on and the cheese drips off as needed.

The Larchmont location adds to much of Village's appeal, adding an ambience similar to a Brooklyn shop. Unfortunately, Village doesn't have the widest delivery radius and there usually is a line of some sort at all hours. There are sporadic complaints of soggy pies upon delivery, so take that into consideration. However, if you really need that NY pie, it's worth the line at the door.

MAYBE NOT A VITAL ORGAN, BUT DEFINITELY AN APPENDIX FOR A SLICE FROM:

While Abbot's may reign as king on the beaches of Venice further South in Manhattan Beach, Manhattan Pizzeria pumps out the best slices for all those sun-tanned beautiful people. Famous for killer hot wings and sandwiches, this beachtown favorite is the only place to eat on the coastline.

The veggie pizza is awesome and tends to be a popular choice for the slightly more health-conscious tanners. For those more haphazard with their diets, wings and a slice of pepperoni on the sand is the way to go.

I was skeptical, but when a friend mentioned a “chicken pesto pizza that is out of this world,” I had to acquiesce. And that's not an understatement.

Manny's is a small, quaint little Italian restaurant in Old Town Pasadena with killer crust and some awesome imported beer. Not too thin like NY style pie but not quite cake thick, their pizzas are freshly thrown and full of flavor. Perfect for lunch. Should you make it over during happy hour, medium sized pizzas are half-off.

Perhaps the only real threat in Hollywood to Village Pizzeria's supremacy of NY style pie is Albano's. Boasting the best meatballs in L.A. along with other traditional Italian fare, the slices here are delicious.

The standard single slice with cheese is oddly fantastic at Albano's. The crust is perfectly malleable and the sauce is a perfect NY match. Free delivery.

It's not exactly conveniently located, but this pizza shop attracts fans from far and wide for their classic, Italian style pizzas, notably their homemade sausage and garlic sauce pie.

Red and white checkered tablecloths line all the tables, adding to the general down-home atmosphere. Order the sausage and garlic – it makes Casa Bianca worth the commute.

Well-known NY-style pizza joint, Rocco's opened this second location at the site of the former Vito's. Rocco's on Vermont – owned by the same three Brooklyn natives who opened the original restaurant on Wilshire – brings the same authentic Brooklyn pizza to the Eastside.

Their slices are just thick enough to be foldable, and they have flavorful, meaty chicken wings with a killer dressing. The white pizza is a wise choice for the more adventurous pizza connoisseur, but if you're east of Crenshaw and craving a slice, a single of Rocco's cheese is the only option real option.

A college town hotspot, Lamonica's traditional NY slices are served up cheap and greasy with meat, veggies and plain cheese. Big enough to fold in half and with a fluffy crust to munch on, Lamonica's doesn't boast more than a solid slice for a solid price. And that's all they need because the pizza speaks for itself.

The atmosphere is typical of midtown lunch hour rush with a long line and unemotional pizza thrower behind the counter. Expect a line on Fridays and Saturdays.Two slices run under five bucks, so it's a cheap date for all the poor college boys out there.

This local pizza shack's claim to fame is its 2002 honor as the nation's best pizza. The Pizza Bianca is the house specialty, and delicious it is. With a thin, crispy crust and fresh blend of toppings including bell peppers, DaMore's brings a healthy alternative to the greasy slop served at up at franchise pizza parlors.

The pizzas run small so order a size up, and be prepared to overeat at the table. The Westwood locations are convenient and offer delivery, but beware of an overly hospitable head baker.

The third Westwood pizza restaurant on the list and perhaps the only substantial rival to Lamonica's, Enzo's near UCLA is not only a student hotspot, but also serves up the best pies in Westwood. No contest.

NY style to the core with a sauce that is dead-on Italian, Enzo's slices and calzones are local students' top picks. Open until 3 a.m. on Fridays and Saturdays, it's a convenient solution for the late-night munchies.

So it's not trendy. It's not a hotspot. It's just a local, privately owned pasta place that happens to serve up a deceivingly tasty Margarita Pizza. It's cheap and delivery is something sleep-deprived college students treasure at 1a.m. on a Tuesday night.

Within walking distance from USC and centrally located around most student housing, it's not uncommon for this place to be packed for lunch and late night dinners. Their pasta is also a first rate, cheap eat.

Their slogan is “the crust you can trust.” The downtown location is a perk, especially for power lunching, as is the 24-hour delivery line. Unfortunately USC is outside the delivery radius, but it's a solid alternative to CPK in terms of downtown fare.

PitFire offers all the staples like cheese, sausage and pepperoni as well as more creative toppings geared for L.A. trendsters like goat cheese and mushroom. Their Tuscan Pie is a solid Neapolitan pizza indeed.

PitFire also makes an assortment of paninis. With a second location in North Hollywood, PitFire is poised to move up in the ranks of quality pizza joints in LA. Watch out CPK!

Vito's was once one of the mighty pizza houses here in L.A. Formerly located on Vermont, Vito's threw one of the best NY style pizzas in town. Folded over with a stack of napkins and a beer, Vito's was the standard for quality pies and was considered the “best pizza in town.”

However, Vito's was forced to close in 1996, forever entombing itself in the totally unofficial L.A. Pizza Hall of Fame.