Why Val Kilmer’s brief cameo is the most powerful moment in ‘Top Gun: Maverick’

Val Kilmer’s lone scene in “Top Gun: Maverick” is strikingly powerful — not only because it successfully projects decades of close friendship between his character, Tom “Iceman” Kazansky, and Tom Cruise’s, Pete “Maverick” Mitchell, but because it also draws on the actor’s own experiences. The combination lays fertile ground for a great, often unheralded performer to shine, if only for a moment.

In the 1986 original, Iceman was Maverick’s competition for the top spot in the Top Gun rankings — both were equally brash and testosterone-fueled young fighter pilots, but Iceman read from the standard playbook and Maverick, to put it kindly, had problems with authority. By the end of that film, the two had been bonded by combat, relying on each other to survive. “Maverick,” set about 35 years later, finds Cruise’s character largely the same — still disobeying orders, still buzzing towers — if calmed and weathered a bit, and struggling with his failure as a surrogate father to his late best friend’s son. It also finds Mav and Ice 35 years into what has turned out to be a very deep and brotherly friendship, with now-Adm. Kazansky having saved still-Capt. Mitchell’s bacon many times. After much setup, viewers are finally treated to one scene (and only one) reuniting the two in the flesh.

Much of the scene’s poignancy, of course, comes from the fact that Kilmer, the handsome golden boy of ‘80s cinema and critically hailed chameleon of the ‘90s and beyond, was struck by throat cancer in the 2010s. Chemotherapy and multiple tracheostomies have the actor with a struggling rasp for a voice, an ordeal he describes in his autobiography, “I’m Your Huckleberry: A Memoir,” and in the Amazon documentary “Val,” which contains stunning behind-the-scenes footage of much of his career, shot by the actor himself.

Because of Kilmer’s condition, throat cancer was written into his character for “Top Gun: Maverick” — a movie in which he wasn’t always a lock to appear. As Kilmer writes in “Huckleberry,” “It didn’t matter that the producers didn’t contact me. As the Temptations sang in the heyday of Motown soul, ‘ain’t too proud to beg.’” In a 2013 interview with Larry King, he said that “no one writing the checks” had approached him when the sequel was being talked about.

It was Cruise, who had “rallied” for Kilmer to star in the original, who pushed for his inclusion in “Maverick,” according to producer Jerry Bruckheimer: “‘We have to have Val, we have to have him back. We have to have him in the film,’ ” Bruckheimer told People last summer, quoting the film’s star. “We all wanted him, but Tom was really adamant that if he’s going to make another ‘Top Gun,’ Val had to be in it.”

At any rate, it’s a very good thing for Cruise that Kilmer reprised the role because Cruise arguably does his best work in scenes relating to Iceman. Even before Kilmer appears on screen, the moment in which Maverick learns Iceman’s cancer has returned is a lovely piece of acting — so simple, so direct. He has the look of someone saying something out loud that he’d feared were true, guessing at it and trying not to make a big deal of it. There’s almost a smile on his face; a smile of confirmation, of facing the worst. Its presence is appropriate and saddening.

But when Maverick and Iceman finally get together on screen again, that’s where we see something really alive. There’s communication happening. We see a relationship informed by years of blanks we can fill in ourselves: Iceman maturing past his brash youth and becoming the leader he was born to be; Maverick stumbling along his own flashier, heroic and less establishment-oriented path. These two rivals from the first film have believably become the very best of friends, even brothers. The writing by Ehren Kruger, Eric Warren Singer and longtime Cruise collaborator Christopher McQuarrie; the unobtrusive direction by Joseph Kosinski; and most of all the settled, lived-in performances by Kilmer and Cruise sell us on that sea change. That’s quite a feat.

Typing his communications to be read on a computer screen, Kilmer can act only physically for most of the scene. It’s all looks and body language, and we buy it all. Here’s a stick jockey in his late 50s or early 60s who has grown up in a very different way than his little brother. Iceman’s now an admiral. He understands the system; he understands responsibility in a much wider-ranging way than does his friend. And even now, with a terminal diagnosis, he’s trying to help and guide Maverick. Kilmer conveys all this and more in this brief appearance. He does that thing that’s so hard to do for real: He listens.

And he gets the best out of his scene partner.

Maverick finally releases his emotions because of Iceman’s standing with him, and because Iceman knows just where to apply pressure to get an honest response. It’s among Cruise’s most believable moments on screen.

When Iceman finally does speak aloud, the emotion he conveys — and creates in the viewer — will have you looking back over his long career wondering how he’s never been nominated for an Oscar. But it’s what he does wordlessly in his “Top Gun: Maverick” cameo, and its connection to his own life, that speaks volumes.

In the end, Kilmer’s silence is plangent. 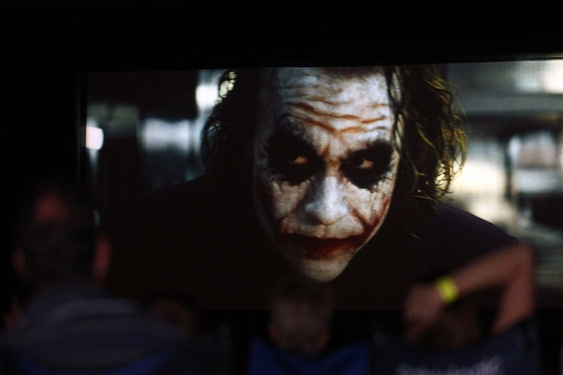