Alicia Silverstone: Returns to the Big Screen in Operation Stormbreaker 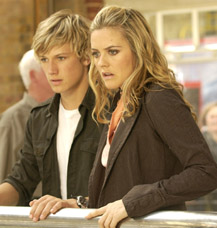 Alicia Silverstone has come a long way since her film debut in The Crush . She was thrust into the mainstream in 1995 as teen queen Cher in Amy Heckerling's Clueless and after that, appeared in films like Batman & Robin , Scooby Doo 2 and 2003's short-lived sitcom, “Miss Match.”

This fall, though, Silverstone is back on the big screen as housekeeper Jack Starbright in Alex Rider: Operation Stormbreaker , a kid-friendly film about a seemingly normal British moppet who, when his Uncle disappears, is recruited by MI6 (a CIA-type agency) to help find the missing man.

Silverstone has been MIA herself – from the film world, at least – over the last couple of years. On her list of accomplishments, though? She got married and then took a part in a David Mamet play (which, she says, was “amazing”).

Now back in front of the camera and promoting Stormbreaker , Silverstone took a few minutes out of her schedule to chat about the film, her relationship and where audiences can find her next.

CC: So, you haven't been around in awhile. Did you take time off just to enjoy being a married woman?

AS: No, I got married and four days later I got on a plane to do this movie. I thought there was going to be time off and then when we were away on our honeymoon, I kept thinking, “I wonder what I'll be doing when I get home, maybe I'll not work for a really long time and just clean my house,” but I got off the plane and had to go straight to the shoot.

CC : How did you get involved with Alex Rider: Stormbreaker ?

AS: I got asked to be in it right after I got married and it sounded like it would be a lot of fun because I knew it was going to be Ewan McGregor, at the time, and Sophie Okonedo – both of them, I'm a huge fan of – so I thought, “this is awesome.” I didn't even feel like I needed to read the script, I just knew that I wanted to be in the movie with them.

CC: Did you even meet Ewan McGregor?

CC : Do you feel like you've gotten the relationship aspect of your life squared away and now you can focus on your acting career?

AS: I don't think about things like that but I'm sure, naturally, that's the truth ... I don't think about, “I've got to get a husband and then I've got to do this.” I just don't work that way. But that would've actually freaked me out if I thought I had to have those things in place – it just doesn't make any sense to me.

But, that's probably because I've been lucky and I had it. I had this really solid relationship for such a long time, there's no drama, I'm not all consumed with madness and mayhem, so I'm able to really just focus on the things that matter. [My husband and I] just love to do yoga together, meditate, grow vegetables in the garden and go on wild, rocky trips and just enjoy being together.

It definitely alleviates any drama – I haven't had any drama in a long time. Been married for like a year, too.

CC : With Stormbreaker done, what are you working on now?

AS: In a couple of weeks I start this new TV show called “The Singles Table” and it's going to be on NBC in the springtime. It's less of a load for me because it-s a half-hour, single-camera show. And the creators are Mike Schiff and Bill Martin and they wrote really great stuff … It's these five single people who are at all different degrees of bitterness but in a hilarious, funny way.

The show opens up and they're all at this wedding at a table in the very back and all the people at the table are like all of these miserable single people. My character's very un-politically correct … she's just doing her thing. She's trying to get by and so are all of these characters. So these people are trying to get by together and [the TV show] follows their stories.