Hallelujah: Leonard Cohen, A Journey, A Song street effort shows an interest in the man & his legacy 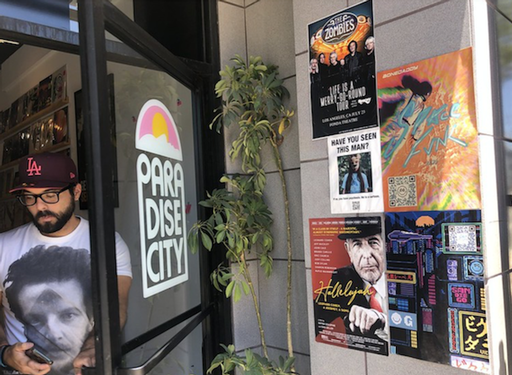 When I take on a street marketing project for a client, I spend an extensive amount of time researching the subject matter in order to help start a conversation and execute a successful campaign.  In this case, Sony Pictures Classics was looking to target vinyl record stores, coffeehouses and other types of retail in Los Angeles and New York City for its upcoming documentary film, Hallelujah: Leonard Cohen, A Journey, A Song. During my research, I made the remarkable discovery that Leonard Cohen had simultaneously lived approximately three blocks from my house for more than a decade. In 2014,  Google Maps actually photographed Cohen sitting in his front yard with a friend while surveying his neighborhood. Ironically, I also learned that we both frequented the same mailbox place, dry cleaner and coffeehouse.

When I embark on a street marketing campaign, I tend to go into a neighborhood myself so I can show the people, who work for me, what I'm looking for in terms of targeting retail as well as the type of photos I want. I consider myself to be quite good at this work because I tell a story with my photos. While I'm doing street marketing, I want to share with the client the beauty in our city: the artwork, the architecture and the interesting retail that comprises a city. In addition, I want to get into the nooks and crannies of unique neighborhoods that are off the beaten track, which house and feed the people that would be interested in a film such as Hallelujah.  Still, the most important part is the engagement aspect.  That is not just going into a store and asking to leave some flyers or hang a poster but to take the time and talk to the manager, store owner or clerk at the register about the film - to involve them in the excitement of the project. It's what is so special when promoting films - that connection you make with a person in a store, and the love and admiration you witness from people when discussing a man such as Leonard Cohen. These are the people that will not only give you space in their establishment but will also help spread the word about a project.

I did a lot of the work in Los Angeles for Hallelujah myself because it became such a unique experience. Leonard Cohen touched so many people's lives: from young to old and from a wide range of ethnicities. Many people I crossed paths with seemed to have a Leonard Cohen story of their own, and everyone took the time to listen to me about the film. In Highland Park, I came across a young lady, who worked in a coffeehouse and told her story of visiting a home in Montreal where Leonard once lived. I came across a young busboy in a cafe in the Arts District, who asked if he could have some postcards so he could share them with the staff in the kitchen. Even the manager in a coffeehouse in Highland Park said that he's not allowed to have outside collateral in the store, but for Leonard Cohen I could leave it. There was an owner of a coffeehouse on Melrose, who divulged that Cohen would come into his place every Saturday, and his daughter used to own a store down the street. My work during this campaign was one moving moment after another. What I found in these vinyl record stores, coffeehouses and other shops I visited were people's passions - their love of music, their love of Leonard Cohen and that kindness and camaraderie still exist among Angelinos for one another.

Hallelujah: Leonard Cohen, A Journey, A Song opens in Los Angeles and New York on July 1.  In Los Angeles, it will be playing at the Laemmle Royal. Hallelujah filmmakers Dayna Goldfine and Dan Geller along with singer-songwriter Sharon Robinson will participate in Q&As at the Royal on July 1 and 2 after the 7 PM screenings. For more information, visit Laemmle.com.

If you want to see over 800 pictures of Hallelujah street marketing outreach in L.A. mixed in with some beautiful street artwork and subliminal messaging how great our city is visit the Campus Circle Flickr page.

For advertising / marketing inquiries, please contact me at sean.bello@campuscircle.net.