Jet: Shines On With New Album 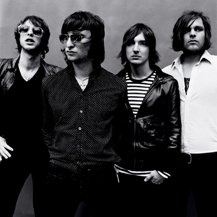 “Sorry,” the bassist for rock group Jet apologizes, “a window just broke and I've cut myself.”

Even through the static-y connection, Wilson seems anxious – and rightly so – he is, for one, bleeding. But perhaps more nerve-racking to the rocker might be the anticipation of leaving the Los Angeles house the group has been calling home for the last few months. Jet has been in L.A. putting the final touches on its highly anticipated follow-up to Get Born , dubbed Shine On . And they're leaving for tour in a few hours.

Produced by Dave Sardy (Oasis, Dirty Pretty Things), Shine On was recorded in a plethora of locations including L.A., Massachusetts, Barbados and the band's native Australia. The album offers 15 new tracks, many with overlapping word usage. “Bring it on Back,” “Shine On” and “Come On, Come On” are just a smattering of some of the seemingly urgent track titles.

The album's title itself is not, as it might seem, a homage to wishful thinking, but rather a memorium to the father of band member Chris Cester, who recently passed away. Though Wilson acknowledges that lyrically, many of the tracks are about the death, fans should also expect to witness the growth of the group since its first album, which lead singer Nic Cester once deemed “immature.”

“Maturing doesn't mean getting older,” Wilson states. “It just means we're becoming more experienced players … We're not trying as hard to sound like anybody else this time around. We're evolving into our own sound.”

The first single, “Put Your Money Where Your Mouth Is,” seems destined to reach the heights of former hits like “Cold Hard Bitch” and “Look What You've Done,” with its eclectic mix of steady drum beats and passionate, squeaking vocals.

“It's a good song,” Wilson believes. “We chose it because it was the best transition between Get Bor n and Shine On . ”

“I can't even remember the last time I got my hair cut,” Wilson chuckles.

Forming in 2001, Jet is still a relatively young band. And they act young. During the band's 2003 road stint, media highlighted the group's tendency to sometimes rock too hard – getting obliterated every night with drugs and alcohol.

“It was our first rock 'n' roll experience,” Wilson explains. “We wanted to get the most out of it. So, yes, we did party hard.”

But in the interim, Wilson says the time off has allowed the group to remember what's important: the music.

“Of course we'll still have a drink,” Wilson says of the upcoming tour. “But it's not going to be the same type of insanity.”

Following up their hugely successful debut might not prove to be an easy feat for the rockers, whose first jaunt on the music scene produced a platinum-plus effort, selling just over three-and-a-half million copies. The catchy first single “Are You Gonna Be My Girl?” is still widely recognized thanks to its tie-in as the beat for silhouetted dancers in old iPod ads.

The guys, however, seem to remain undaunted. Even on their recently re-vamped Web site, Jet appears larger-than-life – with a large picture of the four members' long-haired heads rocking flashy sunglasses and pouty lips.

As they have in the past, the group hopes to maintain the mentality they had from they beginning – one which believes in winning America over town by town.

“It's the only way to do it,” Wilson says. The rocker sounds as if he's calmed down; with a Band-Aid now affixed to his wound, the more relaxed Wilson seems ready to hit the road.

“I'm excited to play our new stuff for the audiences,” he says. “We'd been playing the songs off of Get Born since we were 18.”

No longer teenagers, the boys seem to have grown up musically and emotionally. But will even more success bloat Jet's ego?

Shine On will be available Oct. 3. Jet will perform Oct. 5 at Henry Fonda Theatre, in Los Angeles. For more information, visit www.jettheband.com
Article posted on 9/25/2006
This article has been viewed 2483 times.