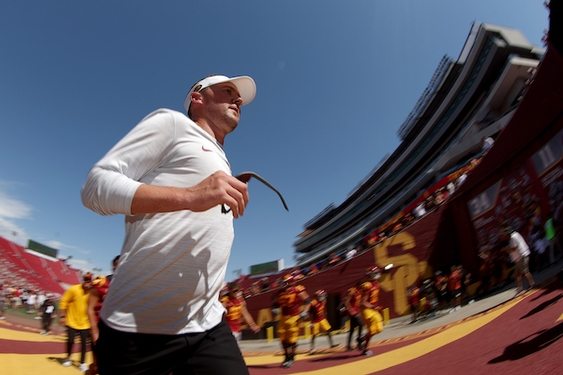 Head coach Lincoln Riley of the USC Trojans looks to make his way off the field after warm-up before the game against the Rice Owls at United Airlines Field at the Los Angeles Memorial Coliseum.

Lincoln Riley knows how to make a good first impression.

The coach opened his USC tenure with a dominant 66-14 win over Rice on Saturday at the Coliseum. A year ago, fans chanted to fire coach Clay Helton after a season-opening win against San Jose State. On Saturday, after the new-look Trojans trounced their visitors and when Riley put on a headset for a postgame interview on the field, fans cheered at his image projected on the concourse TVs.

Here are four takeaways from the game:

Offense as good as advertised

It's no surprise that USC, with a genius head coach, Heisman-contending quarterback and Biletnikoff Award-winning receiver, lit up the scoreboard Saturday. But it wasn't just a high-flying aerial attack that led to USC's highest-scoring game since 2008.

The Trojans (1-0) flashed some impressive playmaking out of the backfield with two touchdowns from Stanford transfer Austin Jones and one more from freshman Raleek Brown, who scored his first college touchdown on a 14-yard run in the second quarter and punctuated the effort with a Heisman pose in the end zone.

"When you talk about somebody who's like a video game player, somebody who will get in the game and do something crazy, that's what I picture [Brown] doing all the time," said Jones, who had 48 rushing yards in four carries. "It amazes me just sitting back in practice through fall camp and I'm like, this dude is real. You got to see it a little bit today, but he's a baller, straight up."

Williams also looked every bit the star we thought he'd be. He had only three incomplete passes in 22 throws in three quarters of efficient play, and one of the miscues was a drop by Tahj Washington. Williams also had a team-high 68 rushing yards in six carries.

This is the defensive chaos that Alex Grinch loves

Alex Grinch, who got his start as a defensive coordinator in charge of undersized units at Washington State that thrived on ball-hawking and speed, has a clear goal of 24 takeaways for USC's defense this season. After grabbing four interceptions Saturday, the Trojans are on pace to blow away that mark.

USC scored on three of those interceptions, tying a school and Pac-12 record for pick-sixes in a game. After safety Calen Bullock returned a tipped pass 93 yards for a score in the second quarter, USC snuffed out three consecutive drives to begin the third quarter with interceptions. Linebackers Shane Lee and Ralen Goforth had 40- and 31-yard pick-sixes, followed by a final interception from Xamarion Gordon.

"We want to play championship ball," Goforth said. "You have to be able to take the ball away and give it back to our offense and have them do what they do with the amazing weapons that we have on that side of the ball."

USC's inability to execute halftime adjustments during Helton's tenure contributed to the program's swift downfall under the former coach. The Trojans failed to score a touchdown in the third quarter in seven of Helton's final eight games at USC, a stretch of futility that included the pandemic-affected 2020 season and the first two games of 2021.

That wasn't a problem in Riley's debut.

The Trojans turned a commanding halftime lead into an absolute laugher with 28 unanswered points in the third quarter.

This could be a big year for Calen Bullock

Calen Bullock's 93-yard pick-six is probably the first of many highlights for the safety this season. The Pasadena native was one of the few bright spots in last season's historically bad defense, earning freshman All-American honors while starting at three different positions.

The rangy 6-foot-3 safety had six tackles to go with his third career interception. While the interception return will lead his highlight reel for years, his tackling was just as important Saturday. He saved a touchdown with a shoestring tackle on Cameron Montgomery in the second quarter, chasing the Rice running back down on a 55-yard run that looked destined for the end zone. When Rice tried the same play on the very next snap, Bullock limited Montgomery to just a seven-yard gain. Three plays later, he was running untouched into the end zone.

"There's [not] really a lot of guys [who] can cover an entire field the way he can," Goforth said. "He can run sideline to sideline, just when you think it's open over here because you see him over there, he can get over there and catch the ball. And it's rare that I see somebody like that. Calen is a special guy and I'm really looking forward to seeing his future."

USC Football
Where does Lincoln Riley’s first-year turnaround at USC fit in the sport’s history?
217 views

USC Football
'We were the greatest team ever.' Anthony Davis, 1972 USC Trojans savor their legacy.
175 views