It’s a fact: The Trojans are back and might be the nation’s best team 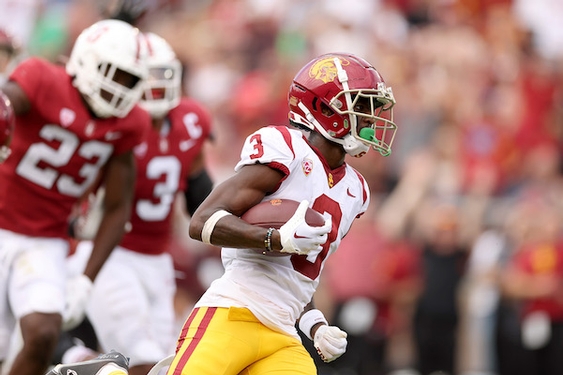 Caleb Williams heaved a ball high through the thick air and into the arms of Jordan Addison, who spun out of a Stanford defender’s grasp and sprinted to the end zone and...

USC showed up at The Farm and in front of a national television audience Saturday in the first real test of the Lincoln Riley era, a battle against stubborn old rival Stanford, a game that would separate fact from fiction.

After a breathtaking 41-28 Trojans victory, the truths were evident.

Fact: USC might be the best team in the country.

Fact: Quarterback Williams might be the best player in the country.

Fact: Nobody should be surprised if the Trojans qualify for the College Football Playoff and Williams wins the Heisman and ...

Yeah, this is happening.

“I love what I’m seeing,” tweeted Reggie Bush during the game at Stanford Stadium, and he was not alone.

While the Trojans’ opener against overmatched Rice was about creating local excitement, this game was about forging national credibility. Performing in front of ABC’s No. 1 announcing team of Rece Davis and Kirk Herbstreit, the Trojans did exactly that.

They took a quick 14-0 lead, blew it out to a 35-14 halftime lead, led 41-14 after three quarters, and then held on to a victory that didn’t feel nearly as close as the final score indicated. They gained 505 yards, had four takeaways despite allowing 441 yards, committed no turnovers, and won here for the first time in eight years.

Not to mention, they avenged last year’s 42-28 defeat to Stanford that cost Clay Helton his job.

“Look at 12 months ago … a lot’s changed,” said Riley afterward near a locker room where his players had been singing the school fight song.

That change was obvious less than three minutes into the game, when Max Williams intercepted a pass from Stanford’s Tanner McKee and, four plays later, Caleb Williams hit Lake McRee on a gorgeous play-action pass for a five-yard touchdown.

Then, after Blackmon’s end-zone interception, it became more obvious when Caleb Williams finished a drive with a screen pass that curling Addison turned into a 22-yard touchdown.

The most electrifying sign of the change occurred in the final moments of the first quarter when Caleb Williams threw that floater that Addison caught at the 15-yard line before spinning out of the grasp of Kyu Blu Kelly and raced in to complete a 75-yard touchdown.

For the USC fans who filled more than half of the seats, it was stirring. For Stanford fans, it was silencing. For everyone watching anywhere, it was revealing.

Fact: When the Trojans are on offense, you can’t look away.

Fact: When the Trojans are on defense, you also can’t look away, as they ended three Stanford first-half drives with dramatic takeaways, two on the goal line.

Fact: If the Trojans aren’t the best team in the country, they’re certainly the most exciting.

“We’re good, and we need to show the world that we’re really good,” said running back Travis Dye. “I’ve been on some really good teams, and this is the best team I’ve ever been on.”

It starts with Caleb Williams. Arriving in Los Angeles as a transfer from Oklahoma with stars in his eyes and endorsements in his wallet, he began the season under as much pressure as anybody in the country.

He’s handled it. He’s proven it. He’s better than advertised. He’s bigger than the hype.

For a second consecutive game he was near perfect, completing 20 of 27 passes for 341 yards and four touchdowns and no interceptions.

For the season, he is 39 of 49 for 590 yards and six touchdown and no interceptions, and he’s even better than that.

About that long pass to Addison that will lead the highlight videos, Caleb Williams shared the credit.

“We all executed all as one at one time and it worked out perfectly,” he said.

While the play was an audible, Caleb Williams gave Riley credit.

It helps that he has Addison, the Pitt transfer who was voted the country’s best receiver last year and is only getting better.

Addison has speed, hands, and worked his way behind Stanford defenders Saturday for seven catches for 172 yards and two touchdowns.

“You put two ballers together, they just make plays naturally,” said running back Austin Jones of the Caleb Williams-Addison duo.

USC, believe it or not, also has a running game. It was surely not lost on old-school Trojans that they took a 35-14 halftime lead when Dye ran through a gaping hole up the middle for 27 yards and a touchdown.

Dye, a celebrated transfer from Oregon, rushed for 105 yards in 14 carries while leading a rushing attack that gained 164 yards.

But it’s not all offense. While the Trojans will deservedly be criticized for giving up big chunks of yardage to the usual rumbling Stanford offense — for a second consecutive week they made the big plays when necessary.

“We’ve got to clean up the mental execution,” said Riley.

USC got sloppy with nine penalties for 104 yards — brings back some bad memories, right? — but indeed, this was another night when it felt like everything was different.

The evening ended with the USC marching band commanding Stanford Stadium with the familiar triumphant chant.

And, man, are they back.

USC Football
Where does Lincoln Riley’s first-year turnaround at USC fit in the sport’s history?
217 views

USC Football
'We were the greatest team ever.' Anthony Davis, 1972 USC Trojans savor their legacy.
175 views