Dj Deacon: Every Tuesday Night @ On the Rox 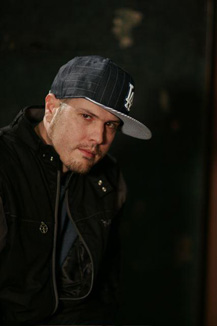 DJing since he was 13-years-old, Deacon has become one of the elite drum and bass DJs in Los Angeles. Having started in hip-hop, DJ Deacon has gone global playing undergrounds, clubs, warehouses parties, raves and music festivals all over the world for the past 12 years.

As the genre of break beat hardcore morphed into what has now become jungle or drum and bass, Deacon became a major fixture within the scene. With the help of his two brothers, Ryan and Frankie, and his cousin Dustin, Wreck-Ignition events took rise.

At Wreck-Ignition events, only jungle music was allowed. In 1996, the four men started their own “uprise” within the drum and bass world, the first-ever, three-room drum and bass experience just for the West Coast.

A modernizer within his craft, DJ Deacon is still at the top of his game due to the ongoing popularity of drum and bass within the country. His schedule still remains a-blazing and Wreck-Ignition events still incite the hottest of nights. And now, the DJ's eyes are set on turning Sunset Boulevard to a cinder.

Above the hallowed Roxy on Sunset is a tiny club, one that makes the proverb “good things, come in small packages” proud. Notoriety and infamy hang high and proudly here. Hollywood's new breed now make their way here, from the trashy to club debutante.

“It's small and intimate; [a place where celebrities go] not to be harassed,” says David Tobin, producer of the event.

Raucous atmospheres are a given, club residences are a must, the booming of which comes out of DJ Deacon's new Tuesday night residency. Having played to crowds of 24,000 people all over the world, Deacon and more than 15 of his fellow top drum and bass colleagues – including R.A.W. and DJ Machete – will hit select Tuesdays.

Crowds being able to witness it all will be up to the capacity of 200. Halloween night will see both the top and bottom of the Roxy morph into a drum and bass pit.

“They're doing this more for their friends and people who enjoy [the music],” Tobin says.

According to Tobin, it's that closeness that sets this club residence apart from others, it's as if you're in the homes of some of the best DJs, just chilling in their living room. Kick back and relax, and if there happens to be a little bit of piano or bongo drum accompaniment needed, than by all means partake in it.

“DJs don't have to worry about playing a set or doing a house party,” Tobin says. “Just have fun and do it.”

On the Rox is located at 9009 W. Sunset Blvd., in West Hollywood. For more information visit www.theroxyonsunset.com.