UCLA wants more students but has no room. So it's buying a campus in Rancho Palos Verdes 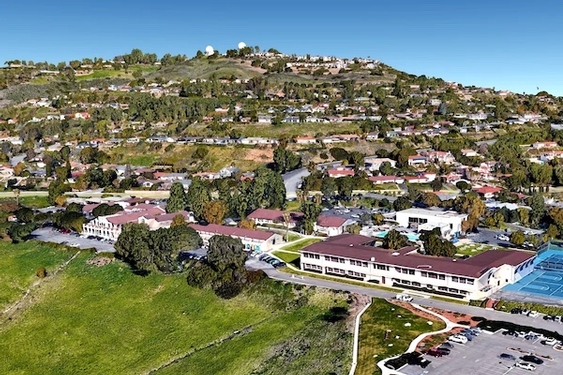 In a milestone move to expand enrollment at the nation's most popular university by creating a satellite campus, UCLA announced Tuesday that it is buying two expansive properties owned by Marymount California University, a small Catholic institution in Rancho Palos Verdes that shuttered its doors last month.

UCLA's $80-million purchase of Marymount's 24.5-acre campus and an 11-acre residential site in nearby San Pedro marks the university's most significant expansion to help meet the burgeoning demand for seats. UCLA drew nearly 140,000 first-year applications for about 6,600 spots in fall 2021 and even more applications this year — sparking angst among the growing legions of rejected Californians and pressure from state legislators to reduce the number of out-of-state students.

But UCLA, whose 419-acre Westwood footprint is the smallest among UC's nine undergraduate campuses, has no room to grow, prompting the campus to look for alternatives.

UCLA Chancellor Gene Block said the Marymount California properties — the university's largest-ever land acquisition — could accommodate 1,000 students and potentially house half of them on the residential property, which has 81 villas. Satellite campuses are just one of several strategies UCLA is developing to add about 3,000 more undergraduates and 350 more graduate students by 2030, he said.

"This is our commitment to the people of California," Block said in an interview. "We realize there's been frustration by the number of young people that want to attend our research universities, and this is, in a significant way, our response to that need."

The university will use general revenue bonds, a common form of funding to initiate large capital projects, to pay for the properties.

The UC Board of Regents, prodded by Gov. Gavin Newsom and state legislators, has made growing enrollment a top priority as applications continue to surge to record levels. President Michael V. Drake and campus chancellors recently designed a plan to increase enrollment by at least 20,000 students — and potentially as many as 33,000 — by 2030.

UC does not plan to build a new campus because of time and expense. But campus leaders are crafting plans to accommodate more students with expanded online courses, summer offerings, off-campus programs and additional support to help students graduate more quickly, which would free up seats.

UC Berkeley Chancellor Carol Christ, in a presentation to UC regents last week, outlined plans for satellite programs at Moffett Field, owned by NASA, that would focus on aerospace science and engineering. She also said Berkeley was considering potential plans to develop one of its land parcels in Richmond to expand capacity for more students and research.

UC Davis is building Aggie Square, an "innovation hub" on its Sacramento campus that will include science and technology buildings and student housing. The campus estimates a few hundred undergraduates can spend a quarter there.

UCLA's opportunity with Marymount California opened in April, when the private institution's board members voted to close the university, which was founded in 1968 as a two-year junior college by the Religious of the Sacred Heart of Mary. Nine years ago, the college changed its name and expanded to a four-year university.

Like other small colleges struggling to survive, Marymount California has seen its enrollment drop — from a peak of about 1,000 in 2014 to about 500 this year — and tuition revenue shrink. After efforts to merge with St. Leo University in Florida collapsed in April, the board took the tough step to close its doors and sell the property, said Marymount California President Brian Marcotte.

"It was really gut-wrenching," Marcotte said. "We had a very unique campus. It was a place where students really thrived. And it was very hard to think about that coming to an end."

The university is helping its students transfer to other institutions, including the University of La Verne.

Marymount California had no shortage of suitors, drawn by its gorgeous location atop a picturesque bluff on the Palos Verdes Peninsula with a view of Catalina Island and tidepools just a five-minute drive away. Shortly after the university announced it would sell the property, 285 inquiries came flooding in and 41 formal bids were presented, Marcotte said. They were narrowed down to seven, with bids close in price but different in vision, he said.

The finalists included four developers and three educational institutions, which Marcotte declined to identify. But he and the board "felt very strongly about UCLA" because of its vision to retain the small-college culture as a satellite campus for diverse students, its status as one of the world's top public universities and its financial capacity to close the deal and start up programs in a timely manner.

For his part, Block said he was saddened by Marymount California's closure but grateful that UCLA was chosen as a steward of the sites.

He said he and his team fell instantly in love with the properties when they visited them in spring. The campus and residential property, which currently houses 81 villas of two and three bedrooms, form an intimate community, he said. The UCLA students who are studying at the satellite campus would be able to live there, Block said.

The sites also offer educational opportunities with their proximity to the Port of Los Angeles in San Pedro Bay and AltaSea, a public-private venture focused on ocean science where some UCLA faculty already do research, he said.

Block said he expected the deal to close next month and that a campus task force, with key involvement of the UCLA Academic Senate, would decide on how to use the new properties. He mused that they could potentially house a summer student leadership academy, a themed program on sustainability, evening lectures for the community, tutoring programs for local children. Programs could start as early as next summer, he said, with a fuller academic operation in place by the fall.

UCLA has not yet said how many students it will admit as 2023-24 first-year students, who will be applying this fall.

"We don't know how we're going to use it; we just sensed it was the right strategy at this time," Block said. "But we are going to carry on the traditions of educating a very diverse and motivated group of students."