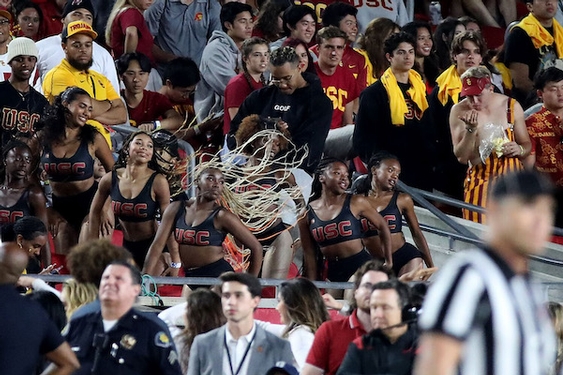 The Cardinal Divas perform in the fourth. quarter of a USC game against Arizona State at the Los Angeles Memorial Coliseum on Saturday night, Oct. 1, 2022. (Luis Sinco/Los Angeles Times/TNS)

Princess Lang pressed send on her innocent tweet. If she got 50 likes on this simple, seven-second video clip of her dancing, the junior majoring in musical theater at USC would feel so famous.

The notifications that followed nearly buzzed a phone-shaped hole into her friend's couch cushion.

More than 3 million views and 104,000 likes streamed in on the video of Lang dancing in the front row at the Coliseum with a newly formed majorette team during USC's football game against Fresno State. Her curly, shoulder-length hair bounced with every arm movement. A bright smile lit up her face.

"The Cardinal Divas of SC are UP NEXT," the tweet said.

The Chicago native, who has performed in professional plays since she was in high school, was not prepared for what followed.

Choreographer Dianna Williams, whose Dancing Dolls of Jackson, Miss., were featured on the Lifetime show "Bring It!", offered to jump "on the next flight to California" to start training with the team. ESPNW shared a clip on Instagram. The Divas appeared on "The Jennifer Hudson Show."

But of all the times Lang's phone buzzed in the aftermath of her viral fame, the most meaningful notification came from someone she barely remembered. It was from a woman who said she went to elementary school with Lang.

"I just want to say you are so inspiring," the message said. "I hope you know you're inspiring so many other girls, not just me."

All the other messages faded away in that moment. Lang, who says she never cries, felt tears welling in her eyes. That is why she started the Cardinal Divas.

Even before stepping on campus at USC, Lang knew she wanted to join a dance team. USC had several options, but "none of them called my name," she said.

Lang didn't feel she fit in either established group because of the way they danced or looked. She didn't want to change herself, so she went back to her dance roots.

Lang, who started dancing at 3 years old, practiced majorette style dance in middle school and high school. The style that incorporates West African movements with hip-hop and jazz to a soundtrack of live marching bands originated at Historically Black Colleges and Universities in the 1960s.

In majorette, Lang didn't just see women who looked like her dancing, she saw Black women who loved to dance. She relished the soulfulness of their movements and the energy they brought to football games. That's what she wanted to bring to USC.

"More people deserve to see this," Lang said, "and more people need to learn about it."

Lang pitched the idea to Mike Munson, the associate director of programs at USC's recreational sports office, last year, her first on campus after the COVID-19 pandemic restricted in-person learning during her freshman year. While the pandemic slowed her process, the unprecedented year only reinforced her belief in her mission, especially after the country's social justice reckoning.

"There was so much going on with the diversity and inclusion things and courses and talks, but with these talks, what was actually getting done?" Lang said. "Where was the actual action? And I didn't see it. And so I said this will be the perfect place for me to really do the action."

Per Munson's advice, Lang applied for a majorette team to become a registered student organization, an application process that took more than two months. She was approved in March 2022 and posted on Instagram in the summer that she was looking for dancers to audition.

Lang, who works with choreographer Jai Robinson, didn't want to limit the group to just those with majorette training, especially considering the lack of access to the style on the West Coast. But Lang wanted dancers who would be dedicated to learning the craft and its history.

Jada Walker, a senior majoring in dance who has appeared at award shows and in music videos, became Lang's co-captain.

Walker, a Houston native whose long, blonde braids whip through the air during routines, danced with a marching band for the first time at a Martin Luther King Jr. parade when she awed the crowd as a 3-year-old holding her own next to more experienced girls. She knew the bar the new group needed to clear.

"If we do this," Walker said, "then we gotta make sure we come correct."

'Beauty of the culture'

Every buzz-buzz notification on Lang's phone felt like a growing tidal wave. It overwhelmed her with gratitude, but also packed an unexpected fury.

Among the thousands of messages on how her group crushed its choreography or inspired girls were seemingly just as many detractors accusing the team of appropriation.

Commenters, many students and alumni of HBCUs, questioned whether something that originated at and is so central to the culture of those schools belonged at a predominantly white institution like USC, where only 5.8% of the student population in fall 2021 was Black. If these women wanted to participate in majorette and get an HBCU experience, they should have gone to an HBCU, strangers wrote online.

Walker was prepared for the backlash. This was just another reason to make sure each movement the team did stayed true to the majorette tradition.

"I would have loved to go to an HBCU. Who doesn't love to be around people that look like them?" said Walker, who noted scholarship opportunities and majors that aren't offered at HBCUs. "But if I can create that space in a space where it's unconventional and it still feels like home, then I'm going to create that and I'm happy that's what we're doing."

Majorette dancing has been embraced by other schools outside of HBCUs. Kent State, California and San Diego State are among the schools that have all-Black majorette teams.

San Diego State's Diamonds, established in 2012, once included rapper Saweetie, whose response was one of the positive reactions that buzzed through Lang's phone.

Although not the first majorette team outside of an HBCU, the Cardinal Divas are the first to get this kind of spotlight, faculty advisor Shannon Johnson Grayson noted, which naturally opened the door to greater criticism. The assistant professor at USC's Kaufman School of Dance was surprised by it but ultimately brushed it off. A native of Baton Rouge, La., and high-school majorette protégé of Southern University's Dancing Dolls, Grayson admires how the Cardinal Divas have learned and respected the dance style while bringing it to a new space.

"People were saying it can't be done somewhere else, but it's someone acknowledging the culture, paying respect to it with research and actually putting in the work and the practice," said Grayson, who attended Howard but did not participate on the majorette team because she wanted to study various forms of dance as part of her major. "I don't see anything wrong with that as long as you pay respect to the culture and when you do it, you do it the right way. … You see the beauty of the culture and you take it with you wherever you go."

It's midnight and the Cardinal Divas still are working. Without a space to practice on campus, the group meets for practice in a shared dance studio in Lang's off-campus dorm building. The Divas don't begin until after Lang finishes rehearsal for her musical theater major, which runs until 10 every night. Wrapping up majorette practice by midnight is a rarity. Lang is "forever grateful" to her nine teammates and choreographer for their dedication.

The dancers, whose majors include business, accounting, real estate and engineering as well as dance, have demanding schedules all day. Grayson is most proud of watching how they balance their academics with the sudden viral fame, which included national media interviews and a 5 a.m. TV appearance.

"Strength, courage and grace," Grayson said of the team.

The team launched a GoFundMe for uniforms, room and board and travel. Lang and Grayson attend regular meetings hoping to secure an opportunity to perform a field routine, so the Cardinal Divas can grow beyond the stationary routines they perform in the stands.

Those routines feature a classic call-and-response style in which Lang and Walker, dancing in the front row, begin a series of steps and dancers join in on every eight-count. On the field, they could take the routines even further and incorporate jumps and flips.

Getting on the field and performing with the band would boost Lang's dream of the Cardinal Divas becoming an official school spirit team like the Song Girls.

Just dancing with her team in the Coliseum stands was surreal, Lang said. She told herself before the Fresno State game that under no circumstances could she cry. Instead, the emotions radiated from her bright smile.

She didn't know exactly how much she did until she looked at her phone 24 hours later.