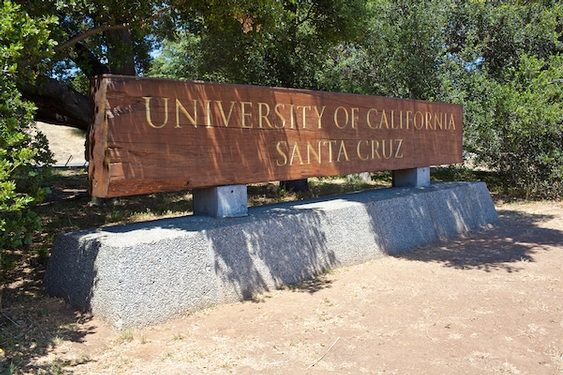 As most of the nine University of California undergraduate campuses start fall quarter this month, the state's continuing college housing shortage has thrown thousands of students into crisis.

Matthew Chin couldn't wait to dive into the life of a UC Santa Cruz college student after the loneliness of online learning. But instead, he is missing out on the camaraderie of roommates, dorm life and full slate of campus activities he had hoped to embrace.

That's because he lives alone in a tiny trailer away from campus — the only shelter he could afford in the scenic coastal town that was recently named the nation's second-priciest rental market.

Chin was shocked at the $1,200 or more monthly rents for an apartment or dorm in Santa Cruz. So his father found him a used trailer to live in and rented a driveway — for $700 a month. Before he got a $1,000 "beater car," Chin had to take two buses, an hourlong commute, to get to campus. Last year, when it was too late to get back to his trailer, he slept overnight in a forested part of campus. One day, he hid his gear — sleeping bag, mat, lantern and ukulele — in a bush because he was too embarrassed to lug it to classes. All of it got stolen.

Stressed and distracted, Chin failed chemistry and changed his major.

"For a lot of students and myself, not having secure housing creates a lot of anxiety and stress," said Chin, a third-year student majoring in environmental studies. "It does definitely contribute to a decline in academic performance. Socially, you feel estranged. If you don't have housing, you wonder what your peers think of you."

As most of the nine University of California undergraduate campuses start fall quarter this month, the state's continuing college housing shortage has thrown thousands of students into crisis as need greatly outpaces supply. About 9,400 students systemwide were denied university housing this fall because of shortages — and some campuses are back to squeezing three students in a dorm room as a stopgap.

Some, like Chin, are living in vehicles. Aimen Imtiaz, a UC Irvine transfer student, said she has had emotional meltdowns — especially after losing hundreds of dollars to a scammer posing as a real estate agent. And some students who manage to find housing struggle to pay for it, working multiple jobs and taking out thousands of dollars in loans as a last resort.

UC leaders, including Board of Regents Chair Richard Leib and Student Assn. President Alex Niles, say that providing affordable student housing is one of the university system's most urgent needs. UC campuses are located on some of the most expensive real estate in the nation, yet the university educates more low-income students than its public and private peers. One-third of all undergraduate students — nearly 78,000 — have annual family incomes low enough, generally $45,000 or less, to qualify for federal Pell Grants. And three UC campuses — Irvine, Davis and San Diego — each enroll more Pell recipients than all Ivy League campuses combined.

"A lot of the students we're accepting have housing and food insecurity, and we have an obligation to address that," Leib said. "UC is the great equalizer. We have to get students housing and food so they can do well."

Leib added that UC should offer unhoused students hotel rooms if necessary — as UC Santa Barbara and a few other campuses did last year when they were hit with unexpected room shortages.

This year, most of the campuses report that housing shortages have somewhat eased, in part because coronavirus infections have dropped and two or more students can share a dorm room again.

UC Berkeley, for instance, set aside only 102 single rooms this year, compared with 453 last year, and has ended up with nearly 400 more dorm beds this fall. The campus turned away about 5,500 housing applicants last year. But supply still fell short and 1,100 students were not offered beds as of earlier this month.

UCLA, Davis, San Diego, Merced and Santa Barbara have been able to accommodate all housing requests submitted in time for this fall. UC San Diego, for instance, added 700 undergraduate beds this year by tripling up some rooms and will reinstate its two-year campus housing guarantee for incoming undergraduate students in fall 2023.

But some campuses were caught off guard by surging demand. UC Riverside, for instance, has added 2,300 new beds since fall 2020 but still had to turn away 3,500 students this fall because the housing demand doubled.

The campus is starting to attract students who live farther away, reducing commuters. Families perceive university housing as more secure, less expensive and more reasonably operated than off-campus private apartments, where rents have skyrocketed and leasing terms have become stricter, he said.

And students are hungering to be back in the hustle and bustle of campus life, Brumbaugh added.

"There is definitely pent-up desire ... to get onto campus and experience college life following two years in which students were stuck at home," he said.

UC Irvine also has an unusually large waiting list this year. Although the campus has been able to accommodate the vast majority of housing requests in the past, it offered beds to only 64% of applicants this fall — leaving about 3,700 students out of luck. American Campus Communities, a privately owned firm that operates five apartment communities for Irvine students on campus, faced a similar shortfall.

Timothy Trevan, executive director of student housing, said that rapidly escalating rents in the Irvine area have fueled the demand for campus housing, which is kept to at least 30% below market value by order of the UC regents. The lack of efficient public transportation to the campus makes it difficult for students to live in more affordable areas, he added. And the hot market has led to more stringent private leasing requirements, he said.

The crisis prompted Clari Gao, a third-year student majoring in English and comparative literature, to help organize campus efforts to advocate for more student housing. She requested a spot in January within five minutes of applications opening for fall placements. But she was shut out and searched for eight months before finally finding a place this month. A survey she launched this summer to document the experiences of students searching for housing drew stories of stress-triggered hair loss and nausea, fear of having to drop out of school and disproportionate harm to low-income communities of color.

One person, who asked for anonymity, described living in a car for the entire year and reaching out to campus officials for help, only to be told to "sleep in Walmart parking lots."

UC Irvine officials said they were unaware of any such suggestion. "If we become aware of a student who may be sleeping in their car, we have social workers dedicated to helping students seeking to secure housing," a campus statement said.

But the university has no control over the business practices of private housing operators. Some now require that student applicants provide a guarantor who earns four times the monthly rent to qualify. That shuts out many UC Irvine students — including most if not all of the 11,000 Pell Grant recipients.

One of them is Helena San Roque, a third-year student in literary journalism. One apartment she and her friends looked at required a guarantor with an annual income of more than $100,000. Her mother couldn't come close to meeting that bar as a single parent earning less than $15,000 a year as a caregiver, she said. Although San Roque hoped to find a single room because of her delicate immune system, she is grateful to a friend who has offered to share her bedroom.

"It's an absurd metric which weeds out a lot of marginalized, underprivileged students," Adriana Lugo, a fourth-year student majoring in sociology and psychology, said about the guarantor income requirements.

To meet the skyrocketing demand, UC campuses have launched a huge building spree.

This fall, UCLA opened two new apartment buildings providing 3,446 beds — allowing it to become the first and only UC campus to guarantee housing for four years to first-year students and two years for transfer students. UCLA has the largest student housing stock in the UC system, with nearly 23,000 beds on and off campus.

UC San Diego, which has the second-largest housing stock, also aims to offer a four-year housing guarantee in future years and has three building projects in the works that will add 5,300 beds by 2025.

UC Davis, which has added 5,000 beds since 2017, is expanding another site to provide 1,500 beds for graduate students and students with families in fall 2023.

Some campuses are facing roadblocks in efforts to expand. UC Santa Barbara encountered fierce opposition to a massive project, dubbed "Dormzilla," that would provide 3,500 more beds in small rooms, most of them without windows. Critics, including a respected architect who resigned from his campus consulting post in protest, said the lack of access to natural light and air could harm students' physical and mental health. They've also complained that project proponents failed to vet those issues publicly before pushing it forward. The project is undergoing an environmental review and will require approval by regents.

Last month, UC Berkeley halted plans to begin construction in People's Park of an apartment building for 1,100 undergraduates and permanent supporting housing for unsheltered and low-income people after angry protests and police clashes. Opponents decried the displacement of unhoused people who live there, the removal of dozens of trees and the effect on the park's legacy as a space for free speech and community power. UC Berkeley counters that the project will preserve green space, include a display to memorialize the park's history and, most importantly, provide badly need housing.

At UC Santa Cruz, a project to build 3,000 student beds has been delayed by litigation, with some opponents fighting to preserve an open meadow where one building is planned. The campus reduced enrollment by 700 students this fall because it had no room to put them but still had a waiting list of more than 1,000 applicants.

Meanwhile, Chin makes the best of his trailer life in Santa Cruz — and his landlady, who is renting out her driveway, allows him bathroom privileges. The biggest hardship is faulty insulation, which can turn the cabin too hot or too cold.

But students deserve better, he said.

"It's been a struggle," Chin said. "UCSC needs to find alternative housing. We need to build more."