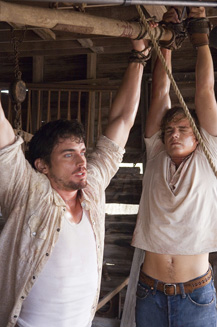 Following in the footsteps of several other successful franchise prequels, such as Star Wars I-III and Batman Begins , TCM: The Beginning finally details the beginnings of the fictitious Hewitt clan, whose psychotic idea of family fun has been sited over the years as being based on actual events. In reality, Leatherface was loosely based on Edward Gein, a notorious murderer who wore human skin, but unlike his Hollywood persona, Gein acted alone and did not use a chainsaw.

With this piece of information finally making its rounds on the Internet (thanks Wikipedia!), New Line Cinema had the freedom to start the story of The Texas Chainsaw Massacre wherever it wanted-and to make Leatherface's body count as high as it wanted, too.

“There are a lot of thrills, kills and blood in this movie,” says Taylor Handley, who plays 18-year-old Dean Hill in the film. “A lot more blood.”

Unlike the 1974 version of The Texas Chainsaw Massacre , which was praised for its use of suspense and dramatic tension over explicit gore, TCM: The Beginning definitely plays off the kill factor and is much more graphic than any of its sequels. While it remains to be seen if Leatherface evolves into another cartoon-like villain who elicits a cheer whenever his body count rises, Handley, who spends the majority of his screen time running from the sadistic killer, says Leatherface doesn't scare him at all.

“ Jaws scares me,” Handley states with a laugh. “So does that movie Copycat . Really, psychotic serial killers are what scare me.”

Not that Leatherface couldn't be classified as a psychotic serial killer. With six films now made about the chainsaw-toting Texan, Leatherface's list of kills is almost as impressive as Jason's, Freddy's or any one of the other Hollywood horror villains who have slayed their way through the decades.

And while Handley wouldn't say if his name was one of the most recent additions on Leatherface's list of kills, fans of the former “O.C.” charmer need not worry about the future of this rising star. Handley recently signed on to star in Kevin Williamson's new CW drama “Hidden Palms,” which focuses on the strange happenings of a resort community.

“The writing's really different,” Handley says about the weekly one-hour drama. “There's a lot viewers haven't seen on TV in a while.”

As Handley waits to find out if “Hidden Palms” will get picked up for a second season, the 22-year-old has kept himself busy, filming back-to-back features, including Christopher Cain's September Dawn , about a Mormon family that participates in the infamous Mountain Meadows Massacre. And while it may seem like Handley has a thing for massacres, the California native says he really has nothing against comedy – he simply picks his projects based on what the characters have to offer.

“Lately it's just been a lot of drama,” he says.

But if there's one thing Handley knows he doesn't have to worry about, it's drama surrounding TCM: The Beginning's release. Most horror movies make their budget back easily, and with one of Hollywood's most recognized horror villains drawing audiences in, the film should have no problem killing off its box office competition.

“Right now my focus is on ‘Hidden Palms,'” Handley concludes. “I know Texas Chainsaw Massacre's going to be really good. People are going to like to see how Leatherface came about, and it's a great movie.”