The Last King of Scotland: Forest Whitaker Takes on a Real-Life Role in the Magnetic, Murderous Drama 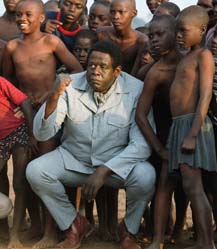 Since Idi Amin seized the presidency of Uganda in 1971, he proceeded to build his legacy as one of the most brutal and despotic rulers that Africa would ever come to experience. In The Last King of Scotland , that notorious legacy is not only affirmed but also illustrated through Forest Whitaker's stunning depiction of the enigmatic ruler.

“He had such a clear understanding of Amin that it changed the way I thought of him myself,” says director Kevin Macdonald of Whitaker's approach towards the role. “He [Amin] is a bundle of contradictions and that makes him fascinating as a character portrayal.”

Based on the novel by Giles Foden , The Last King of Scotland functions as a fictionalized account of the very real, and now deceased, former leader who generated international headlines and widespread criticism for his terrorist-like tactics, domestically and geo-politically. The unusual nature of the title relates to the peculiarities of the ruler himself.

“It comes from the fact that Amin had a fascination for all things Scottish and that's partly because he saw the Ugandans and Scottish having a lot in common,” says Macdonald. “He said that he managed to rid Uganda of the pernicious influence of the English and he would do the same for the Scots – if they wanted him to come, he would be their last king.”

From expelling the Indian population to ordering the massive killings of dissenters, Whitaker had to re-enact the most atrocious of scenes that colored Amin's eight-year reign. Although his grandiose performance hinged specifically on conveying Amin's unpredictable and intense persona, he embraced the greater context of the role as well.

Shot entirely in Uganda, the film introduces the world of Amin through the bright eyes of a young Scot, Doctor Nicholas Garrigan (James McAvoy). When Garrigan's volunteer work in the Ugandan outskirts is interrupted by an invitation to become Amin's personal doctor in the capital city, he naively enters into the President's corrupt regime as an advisor, a participant and as a witness.

Before McAvoy agreed to take on this critical role, he needed to dispel his own apprehensions.

“I was worried that it was just another story of the white man in Africa being the hero,” he says. “He [Macdonald] convinced me that I would have freedom to play it much more truthfully and that it would be a vain representation.”

That representation centers on the relationship between Uganda and its former British colonizer. Although the film centers on Amin himself, the history of Amin's rise is intimately connected to British involvement as a former overseer and as a post-colonial presence. McAvoy sees the friendship between Garrigan and Amin as a device to illuminate the colonial relationship, and hopes that other African-themed films would take a similar, symbolic approach.

For Whitaker, the production marked his first trip to his ancestral homeland.

“I wanted to understand certain things about myself and my own heritage here before I went to Africa,” says Whitaker of his long-awaited excursion. “Spiritually, I was trying to grow so when I went there I would have a deep understanding of certain things.”

Nearly 25 years after he made his first professional acting debut, his portrayal of Amin is garnering serious Oscar buzz. Despite embarking on a subject matter that he was, at first, only loosely familiar with, Whitaker admits that The Last King of Scotland may have just provided him with not only a rare opportunity but also a rare sense of satisfaction.

“I feel like I did everything I could do,” he says. “I don't always like my work and I feel comfortable with it. I feel proud of it and that's unusual for me.”

The Last King of Scotland is currently in theaters.