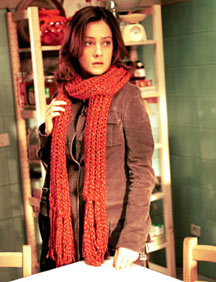 Italian cinema has been in a mediocre dry spell for almost two decades. In that time, one could probably count, with the fingers on either hand, the number of excellent films that have come from this southern European peninsula — Cinema Paradiso, Malena, The Last Kiss and Life is Beautiful.

Giovanna (Giovanna Mezzogiorno of The Last Kiss) is a bored housewife with two children and a husband (Filippo Nigro) that works the graveyard shift. To halt the monotony of her everyday life, she takes delight in baking pastries. Her boredom leads to bouts of voyeurism, as she stands in her dark kitchen to look at her neighbor Lorenzo (Raoul Bova) across the street. Hence the title, Facing Windows.

One day while walking, Giovanna and her husband Filippo meet an elderly gentleman who has no idea where he is, but can only say that his name is Simone. The couple takes him back to their home and a mystery ensues about the identity of this senile old man. Played by the late Italian actor Massimo Girotti, Simone becomes somewhat of a third child for Giovanna, as she is constantly looking after him as he wanders away. One night while selling her pastries and with Simone in tow, Giovanna happens upon Lorenzo who becomes attracted to her.

As the mystery continues, it is learned that Simone was a baker earlier in his life, and the pastries that both he and Giovanna create become some sort of metaphor to say that life should be sweet, but in reality is dull, somewhat like this film.

Having Girotti cast in this film may at first give those who appreciate Italian cinema the belief that Facing Windows is well on its way to being a superb film, considering the late actor has been in some of the greatest Italian films (Ossessione, The Innocent) ever produced. Instead, the viewer will most likely acquire Giovanna’s typical emotion — boredom.