Dirty Little Secret: The Secret is Out 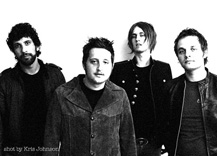 They get it all the time and they're getting pretty tired of it: “Los Angeles' best kept secret.”

But with a name like Dirty Little Secret, it's easy to see why any up-and-coming L.A. band would be pigeonholed as L.A.'s greatest undiscovered talent.

“It's also the nice way of saying we've been passed over,” jokes lead singer Louis Castle.

The name has stuck since 2002, when DLS began killing the streets of L.A. shortly after longtime chums Castle and bassist James Bairian began writing songs together.

“Sometimes when I write a song and I'm actually thinking about influences, I try to write like Louis does,” says Bairian, who shares the majority of the songwriting duties with Castle. “If he wrote a good song, I gotta write [a song] that's in the vein. Whatever he's listening to and influencing him, I'm influenced by that.”

After a rough start full of member lineup changes, DLS released a self-titled EP in 2004, quickly launching the band's popularity in many of clubs and bars – including Spaceland, Cinespace and King King – allowing it to share the stage with some of the biggest names in both mainstream and indie rock: Beck; Peaches; and living legend John Cale of the Velvet Underground.

Now that the band has added Brian Monte on drums and Torin Gerhart on lead guitar, DLS has made a name for itself and built quite a following. DLS has gained great exposure on the MTV Movie Awards and HBO's “Entourage,” as a featured artist on MySpace and as one of Amoeba Music's Home Grown Artists.

The group spans an ever-going list of influences and sports a sound that is often likened to a mixture of the Pixies' high-tone yelps with a hint of Joy Division's dark, bleating vocals combined with a dash of early At the Drive-In, circa Acrobatic Tenement , topped off with the dance-punk ethos of Gang of Four.

Much like the latter, DLS is one of the few bands around whose punk roots match perfectly with its dance-ingrained tempos. Its live show is impeccable – complete with ongoing video-in-the-making background visuals on an oversized projector screen.

DLS distinguishes itself from the Hollywood-Silverlake scene with a highly sexual and seductive sound. With its much-anticipated debut album, Cabin Fever , getting great feedback, DLS has a lot on its plate. The band just finished filming a video for “Hush Your Lips” featuring '80s babe Elizabeth Daily (Dottie in Pee-wee's Big Adventure , Loryn in Valley Girl) .

Though DLS remains a small drop in the eternal sea of L.A. indie rock, its influence has reached a handful of bands, specifically Giant Drag. Both Bairian and Castle produced Giant Drag's Hearts and Unicorns .

“When [DLS] started, Giant Drag was starting, so we were playing together a lot. When her record came and she got a record deal, it was pretty natural to record her,” says Castle of Giant Drag's frontwoman Annie Hardy.

“It was an incredible amount of work,” says Castle of producing and recording Hearts and Unicorns . “It was really fun, but after that I said, ‘Maybe I shouldn't be a producer.'”

Hardy returned the favor by singing on a few DLS songs including “Hush Your Lips” and “33 and 32.”

In two years, the boys of DLS picture themselves in the same recording studio with the same friends and the same band mates, still laughing at the same stupid jokes.

“It doesn't even concern us playing a sold-out show or playing with the coolest, hippest band,” says Gerhart. “We're just making our music and we're playing with our best friends. It's great, it's such a nice environment to be in all the time. It's so creative and so inspiring.”

As for now, the band is hard at work writing and recording its forthcoming album.

“The writing is pretty far along,” says Bairian, pointing at his Mac that contains a seemingly endless list of recorded tracks and demos.

“The recording is behind, but the concept is there,” says Gerhart, which, after a preview and following the similarity in the working song titles including “Dreams” and “Dreamscape,” seems to follow a mellow sleep state of being.

Dirty Little Secret will perform Oct. 9 at the Viper Room, in West Hollywood and Oct. 27 at Amoeba Records, in Hollywood. For more information, visit www.dirtylittlesecret.biz or www.myspace.com/dlsecret.