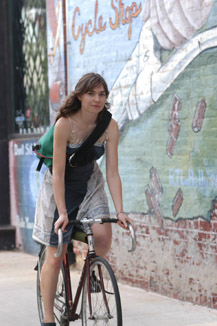 Fred Flintstone may use his feet for brakes, but bicyclists aren't supposed to stop that way. Yet single-speed and fixed-gear bikes, for which brakes are an optional feature, are becoming a favorite among urban bicyclists around the country.

“It's something that started with racing bikes and the bike messenger community. They're now really popular with 20-year-olds,” says Elise Robison, sales associate at Rapid Transit Cycle Shop in Chicago's Bucktown neighborhood. “We always encourage brakes. It's not really very safe if you don't know how to ride a fixed gear.”

While the specialized bikes comprise a small part of bike sales – one analyst says it's about 5 percent – their popularity in urban areas is growing. Major manufacturers like Trek and Giant have introduced fixed-gear models, and Robison says Rapid Transit sold out its stock of the popular Jamis Sputnik model (retail price $1,200) a few months ago.

That's pricey, but many people will take an old, working bike ($40 to $60) and have a friend strip the gears off it to make it a single-speed, she adds.

The “fixies,” as they're sometimes called, recently ran into some legal trouble in Portland, Ore., where a judge upheld a traffic ticket issued to a fixed-gear cyclist. Oregon law requires brakes, but activists contended that the law does not spell out what constitutes a brake.

Circuit Judge Pro Tem Gregg Lowe disagreed.Lowe says in an interview that the defense argued that its client, a bike messenger, was strong enough to stop her bike with her legs and feet. But the Oregon law says the bicycle must be “equipped” with a brake. So, the argument failed even before considering safety issues, Lowe says.

“It's pretty clear it has to be equipped with a brake. Musculature alone wasn't sufficient to meet that statute,” he says.

Randy Neufeld, chief strategy officer for the Chicagoland Bicycle Federation, says fixed-gear bikes are not a major traffic-safety issue. Bike riders who ride at night without lights or disobey traffic signs are a problem, he says. According to Newfeld, cars that speed in urban environments or parked drivers who open their doors without checking for bicyclists are also dangers.

He says the single-speed models “look like the old coaster bikes with no derailleurs.

“That's why people like them; it's a very simple bike. It's cool.”