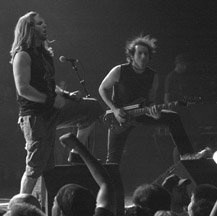 With all their lyrical talk of darkness, angst, bitterness and violence, hardcore bands can easily get a reputation for taking themselves entirely too seriously. But if ever there was any doubt that the genre does indeed have a sense of humor, cruel as it may be, this tour was out to say otherwise.

It wasn't that long ago that all the current headliner-worthy bands were making their presence known to the mainstream masses and revolutionary bands were popping up faster than new cases of the clap.

But things have inexplicably stagnated as of late. As great as the upper echelon of harder-edged bands are, their numbers are pretty select and there don't seem to be a great many worthy candidates for new membership to the club.

Three shitty opening bands, not fit to hold the guitar strings of the two headliners, opened this show; it's a wonder anyone comes to shows early.

Bleeding Through took stage next, bringing its signature moves, but without much feeling this time. While the band's musicianship is as solid as ever and it continues to produce fresh material, it hasn't done much to make its performances reflect its consistently improving songwriting.

The sextet effectively got its audience worked up with a set list that was heavier on newer songs like “Dearly Demented” and “Kill To Believe” from its latest album, The Truth . But the disjointed energy levels between the songs were the only thing stopping a pretty cool band from being amazing.

Taking stage last, Unearth brought its usual bag o' tricks, along with tracks from the band's new album , III: In the Eyes of Fire . What makes it work for them, however, is the unpredictability of how the crowd and everyone else in the band reacts to said tricks.

And let's be honest, watching dudes shred some brutal solos while sucking down a beer bong just never gets old .
Article posted on 10/3/2006
This article has been viewed 2062 times.