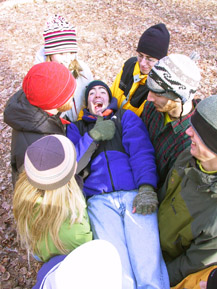 Instead of sitting in a vapid, air-conditioned classroom surrounded by cinder block walls and computer screens, outdoor orientation programs engage students in activities that test them both physically and mentally as they learn about group dynamics and gain self confidence by rappelling off boulders and crashing through white-water rapids.

“The outdoors provides such an incredible tool for growth and development,” says Jess Ross, the coordinator of Harvard's First-Year Orientation Program (FOP), which started in 1979 and now caters to about 300 student participants each summer. “That week provides [students with] a lot of confidence-building and personal growth,” she says.

“Nothing's better than the outdoors for breaking down barriers,” Bell says.

His research aide and 2002 FOP alumnus Brady Williams agrees. “You're camping in the woods each night, no contact with the outside, which is one of the big benefits of these trips,” he says. “You're so self-contained. You can develop your own community.”

Most of the programs were born within the last 35 years, according to Rick Curtis, who has coordinated Princeton's Outdoor Action program for 25 years.

The first wave of popularity happened in the '70s due to the influence of Outward Bound and the National Outdoor Leadership School.

These programs “got the momentum going,” Curtis says. As their popularity rose, some began wondering about the next step. For many, the answer was to target college students. Princeton's Outdoor Action program started in 1974, and Harvard's FOP followed three years later.

The second wave came in the late '80s and early '90s when other schools that weren't part of the first wave noticed the trend and started their own programs, Curtis says.

Schools that still don't have programs are part of the last wave as they implement smaller pieces of the larger picture of an outdoor program, like a climbing wall, according to Curtis.

“It's almost expected,” he says. “The notion that if you're a big size school and you don't have some sort of outdoor activities, it's like not having a good health/fitness center.”

These orientation programs have been more than just outlets for students.

“Most of the research shows that experiential programs are more effective at helping retain students and giving them a much better sense of place,” says Tom Lindblade, former chair of Schools and College, an experiential education professional group and the coordinator of field and experiential learning at the College of Dupage in Illinois.

Part of the success of these programs is due to the fact that experiential education “brings a lot more interest and excitement, which equates to more learning and more involvement in what students are interested in,” he says.

The response so far suggests that these programs will continue to grow in popularity and size, if nothing else because they work.

In many cases students surprise themselves with their ability to overcome adversity, a powerful realization for a young adult about to enter a university environment.

As for Bloomsburg's Matthew Long, he's been enjoying the positive effects of QUEST, the outdoor education program that runs the Freshman Leadership Experience, for three years as an instructor and the group's marketing coordinator.

“I feel very lucky and blessed,” he says. “Looking back on it I wish I could do it over and over.”

Distributed by McClatchy-Tribune Information Services
Article posted on 10/3/2006
This article has been viewed 1398 times.