Vacation Time: More Workers are Passing it up to get Ahead in the Workplace 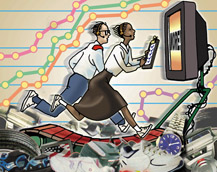 Summer is officially over, as is peak vacation season. So begins the return of the working masses to the daily grind.

But many of us aren't trudging back to work well rested from a couple of weeks of lying on the beach.

Increasingly, Americans loaded with work are forgoing their vacation time and clocking more hours on the job, widening the disparity between the U.S. and other countries where vacations are mandatory and often stretch to a month of idle bliss.

The trend has heightened the hand-wringing over overworked Americans whose health, lifestyles and productivity diminish the harder they toil. But the oft-touted American work ethic continues to push those driven by ambition or necessity to scrap their time off to pursue a better life.

Part of the reason for wasted vacation is that many people see it as an unnecessary luxury.

The U.S. is the only industrialized country that does not require employers to give workers paid time off – vacation leave, sick leave or maternity leave. It's up to employers to design vacation policies, and about 25 percent of U.S. workers get no paid leave at all, according to the Bureau of Labor Statistics.

Initiatives like Seattle-based Take Back Your Time and Santa Monica, Calif.-based Work to Live are lobbying for a federal law mandating that employers give at least three weeks of paid leave annually, and hope the issue enters the political discussion in the run-up to midterm elections.

“There does seem to be an attitude that only weaklings take vacation,” says John De Graaf, national coordinator of Take Back Your Time. “If there were a [minimum-leave] law, there would be much more of a sense that this is my right.”

Working Americans get, on average, 14 days of paid vacation, and a third can't even wrench themselves from their cubicles long enough to take all of them, according to Expedia.com's annual vacation survey.

For some people, competition is fierce, and staying at their desks is a matter of survival.

Robert Dooley, 26, works in sales at a stock photography company in Chicago's South Loop that evaluates him monthly against his co-workers. Take time off and you fall behind, he says.

Dooley says he hasn't taken a full week of vacation since he started working at the company two years ago, but he knew what he was in for.

“It's kind of the standard in corporate America,” says Dooley, who is allotted 14 vacation days a year. “But I do get burned out.”

Even people who make their own hours give up vacations in favor of productivity.

Terri Boyce, 29, a realtor in Chicago's Lincoln Park, says she passed up a trip with her brother to Tybee Island in Georgia because she had to show properties.

“When you take a vacation it's time that you're not making money,” says Boyce. When she does take breaks, she says, her BlackBerry comes with her because she's afraid she'll “miss something.”

Technology has not only made it harder to leave work behind, but also to leave in the first place.

“Technologies that are supposed to free our time really have just made us work faster,” De Graaf says. “People return from vacation and have 300 to 400 e-mails.”