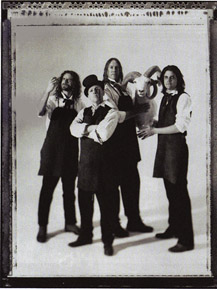 Tool isn't the easiest band to figure out.

The California group's heavy, experimental rock is as intricate and oblique as it is intense. The lyrics are notoriously cryptic, shrouded in an enigmatic aura that seeps into the band's stage and video presentations. Even the foursome's massive commercial success can be a head-scratcher: Progressive metal bands like Tool, the conventional wisdom goes, aren't supposed to top the pop charts.

“There's a lot of give and take, a lot of compromise, a lot of teamwork. We split everything four ways, and we vote on everything.” he says. “We have that understanding, and I think that's why we've outlasted our peers. Nearly every other band from 1990 that I knew has broken up and isn't around anymore.”

Tool isn't just still around; it's at the top of its game. The band's spring release, 10,000 Days , earned strong reviews and debuted at No. 1 on Billboard's album chart, just like 2001's Lateralus before it. Thanks to a rabidly devoted fan base that has turned Tool analysis into a lifestyle, the group is one of the few contemporary rock outfits with the muscle to book a big-arena tour.

Onstage, Jones and bandmates Maynard James Keenan (vocals), Danny Carey (drums) and Justin Chancellor (bass) deliver a customarily taut, high-wattage attack on their epic songs, which include a hefty dose of material from the new record.

“Maybe we don't jump all over the stage, but we definitely rip our guts out every time we play,” says the guitarist. “It's more about the show. We as individuals come second, and it's been that way from the beginning. We always wanted to push the music and have the band in the shadows. It's a very visual show, a lot of left-brain/right-brain stimulation.”

Still, for all the complexity of the music, Jones says, he's able to release himself onstage.

“It's like I'm lost in the moment and enjoying it. I don't know what to compare it to – it's like when you're watching a movie and getting completely lost in it, not thinking about the cameraman or the lighting or the special effects.”

Jones and company are known for packing big stuff into small doses: 10,000 Days is only their fourth album in 16 years. Jones says the patient work pace is a result of the band's creative method – and has probably helped protect Tool from record-biz burnout.

“The bands who put out a record every year, afraid to lose their fan base, there's always a song on the new record that kind of sounds like a song on the last record. They become like a bad cover band of themselves,” he says. “We've always rolled with the punches, since our first record.”

Jones says, “the thing that's kept us sane and not turned us into idiot-ego rock stars is that as people we don't take ourselves seriously one bit. We're four geeks – we have all the jokes and inside words and ideas you have with your friends when you go out to a bar. It's a lot more real, less glam.”

But Tool is intensely serious about its music. And while Jones is at a loss to explain his band's commercial triumphs, he's pretty sure he understands listeners' passion.

“People are going to see that. They're going to be able to consciously or subconsciously understand that there's been a lot of hard work put into it.”