Robin Williams: Comedian Plays a Jon Stewart-Type Role in Man of the Year 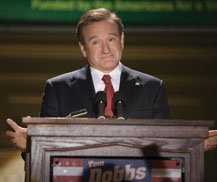 For Robin Williams, now is the right time to take a comic look at the structures that have come to dominate politics, voting and the presidency. In Man of the Year , the comedian – under the direction of Barry Levinson ( Wag the Dog ) – stars as Tom Dobbs, the host of a political program similar to “The Daily Show,” who suddenly becomes an audience favorite for president.

Williams quips about any real-life pursuit of the presidency for him, especially with counterparts such as Arnold Schwarzenegger having succeeded in politics, by saying, “The idea of running … for president: No, not for me. But I like my character. I believe that I serve a better purpose by being able to make fun of everything. I wouldn't want to run.”

Drawing on the vast array of “thorns” in the American political process at the moment, Man of the Year serves as a comedy-laced exposé of the growing rift between the institution of the presidency and the American people on one hand, and the different pressures that operate against “free” and informed elections on the other, which in turn disenfranchise the voting public. The film delves into the themes of political change, honesty, accountability and the new electronic voting systems.

“Just the system [is what motivated me to do this film],” Williams says. “I wanted to talk about the whole system; how is it working? Is everyone happy with the way things are? If you're a Democrat, you say, ‘Gosh, we're doing well'. If you're a Republican, you're going, ‘Fuck 'em!'

“I think it's the idea of what's working well right now – are we as a country doing very well? Are we actually functioning to the best of our abilities?” questions Williams. “If you look at most countries, how do we stand in the world? How come we have not built New Orleans … As a system, as a comic, as you see, with all these guys like Bill Maher and Jon Stewart, all they're doing is basically saying, ‘here are the absurdities' and people laugh and yet it still goes on. You can look at any given day – it's insane.”

Behind Man of the Year is the idea of the pursuit of change within the current political process. Williams' character, Tom Dobbs, attempts candor, honesty and addressing the public without any mask or charlatanism. “This is not about one party or the other – it's about the whole system. It sucks!” says Williams candidly.

Williams is known for his comedic characters and extremely candid remarks and has also built a unique public profile himself, full of crowd-pleasing interviews and memorable quotes.

“The idea of being on the other side [in the film] – the interviewer – is an interesting place for me, because normally I'm their worst nightmare,” says the actor. “The idea of answering questions and asking questions … It's interesting for me to watch them [show hosts]. I've actually been on all of them – well, not actually on them but near them. Look at the idea behind the desk, what it is to sit and ask someone a question and listening and building off of that.”

Adding to Williams' many comments, director Levinson steps in to talk about Williams' performance in Man of the Year . “The good thing about Robin is that he has enough discipline as an actor to know where the boundaries are. It's not like he's bouncing off the walls and whatever,”

says Levinson about the actor on the shoot, which was completed in a mere 42 days.

“He does know where we have to get to and what we have to accomplish and if we can improve upon certain moments, we'd take the time to do it, even though we didn't have a lot of time for this movie.”

Man of the Year releases in theaters Oct. 13.