John Cena: WWE Star Kicks his way onto the Big Screen in The Marine 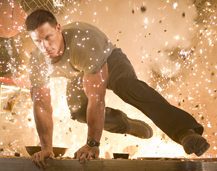 John Cena is a frightening human being – this was the sum of my judgment before meeting the man. The basis of my pronouncement? The two minutes of explosives-laden, spin kick fury that constitutes the trailer for his upcoming cinematic debut in the The Marine , combined with a perusal of his ample Wikipedia entry (longer than Herman Melville's, shorter than President Nixon's).

From the entry I learned that Cena is one of pro wrestling's gladiator gods, a multiple title holder with a penchant for spitting freestyle raps and throwin' down his signature move: the disarmingly subtle F-U. And from the trailer, I learned that he likes to spin kick; hard.

My judgment was validated when I met Cena. I found him lounging in a living room style lobby on the 10th floor of his hotel. Sure, he was just relaxing in shorts and a backwards baseball cap watching some baseball, but by the time he stood up to shake my hand, I had no choice but to alter my initial assessment: Cena is not frightening, he is terrifying . Although maybe just an inch or so taller than me at 6'2” or 6'3”, Cena has a good 90 pounds on me – and not just 90 pounds of burrito chub either. Ninety pounds of steely blood and sinew killing force.

But once past the overwhelmingly intimidating physicality of the guy, he is disarmingly friendly (for a human beat-down machine). Focused, and at times intense, Cena is savvy enough to know that he's being groomed as the next break out pro-wrestling star, heir to the Hulkster, Stone Cold and the Rock.

For all the calculations of career and character he has had to make over the last five years, Cena still comes across like the underdog. Describing his original aspirations as non-existent, Cena says with a shake of his head, “Man, I'm from West Newburry (Mass.). I didn't know how I'd leave.” After spending his youth as the prototypical blue collar kid getting into trouble, Cena came out to Southern California in 1999 “with a duffel-bag and 500 bucks.”

From there, a friend got him involved in a regional wrestling league (UPW) and pretty soon he was signed to a development contract with the big time: the WWE (the successor league to the WWF owned by the alarmingly tanned Vince McMahon). In 2002, Cena was battling Kurt Angle for the championship in front of an immediate audience of thousands, and a TV audience of millions.

Since then, Cena has won both the U.S. and WWE championship belts, forever ingraining his badass-ness into the collective psyche of a generation of 10-year-old boys. Not bad for a small town Massachusetts guy with little direction.

But now, after conquering that boys world, Cena's out to power slam a new one – not for kids. But filled with adults that can't stop acting like kids, Hollywood. With The Marine , Cena is looking to revive the angry ripped dude kicking ass in the fabled tradition of Predator , Blood Sport and Die Hard ; right in that late '80s/early '90s sweet spot where a roundhouse kick to the face of some quick quipping evildoer was more precious than a server load of artfully rendered CGI.

Cena sees the goal of the movie as clear: “This movie will take you back to the genre of believable kick-ass action heroes … so when that 250 pounds of pissed off marine comes crashing through that screen to get his wife back, you believe it.” As he says it in his appropriately deep tenor, I believe him.

This film is so profoundly badass, that the studio is not having any advance screening for critics. While this might be construed as fear on the studio's part (and everyone knows how un-badass fear is), Cena explains the decision like this, “That's simply because the film is what it is. It's an action movie … The true critics for a movie like this are the people buying tickets.”

And what the people buying tickets will see is Cena earnestly applied to the art and craft of film acting. “The biggest challenge for me was getting used to being on film. Film is really different from a live sports entertainment setting.”

Clearly, but how? “Well, first of all you don't have 20,000 people helping you out.” Not only did he have to find a new source of motivation, but he also had to get accustomed to that element of repetition absent when you're in the ring choke slamming some roid-monster in tights. He continues, “In movies, if you do something that you think is good, they may want another angle on it, or they may wanna light it differently … it's very, very difficult.”

Cena took acting classes before and during the filming, and is quick to acknowledge that he still “has a long way to go” with his acting. He exhibits a surprising (if not so ass-kicking) amount of grace and self-awareness.

Further helping Cena along the movie process were first-time director John Bonito and co-stars Kelly Carlson (the marine's hot kidnapped wife) and Robert Patrick (the marine's grizzled smart-ass nemesis). Coming from the wrestling world, Cena was unsure what to make of Bonito. “I expressed to him my discontent with Hollywood, but I also expressed to him the fact that I wanted to make this thing work, not to pat me on the ass if I'm doing a shitty job.” Open to criticism, Cena tried to learn as much as he could, from as many as he could.

Say what you will about the cultural merits of wrestling or action movies, but the work ethic required to be a part of either is masochistic and undeniable. During the shoot in Australia, Cena would fly back every two weeks to the states so that he could appear with WWE.

Now that he's back to wrestling full time, he is on the road every week, responsible for driving himself the 300-400 miles between locations for four weekly shows, dealing with fans and working out two hours a day so he can continue scaring reporters and awing audiences. The only thing more terrifying than the wrath of John Cena, is the thought of working as hard as he does.

So while he's not yet at the action stature of a Stallone or a Schwarzenegger, it's probably a bad idea to count out the possibility. For all the accomplishments, Cena is still hungry, his shoulder chipped in perpetuity, poised and eager to take on the film industry naysayers.

He remarks, “Anybody who doubts my resume can tune into USA Network on Monday nights, and see me kick ass for real.”

The Marine releases in theaters Oct. 13.