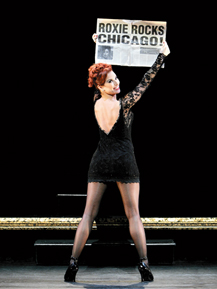 Winner of six Tony Awards, including Best Musical Revival, and recipient of a Grammy Award for its cast recording, “Chicago” is one of those rare Broadway musicals that's withstood the test of time and manages to be a hit no matter what format it's presented in. Whether onstage or on the silver screen, 'Chicago' continues to entertain people with its “Razzle Dazzle” style, wowing both audiences and critics alike with its music and dancing.

While those living in Southern California may think the closest they'll ever get to “All That Jazz” is bringing Miramax's Academy Award-winning version of the musical home with them on DVD, fans who act fast won't have to buy a plane ticket to see 'Chicago' on Broadway to experience the hit musical live.

The national tour of the smash-hit musical comes to Southern California for a special limited engagement starring Michelle DeJean, a long-standing member of the play's Broadway company, as Roxie Hart. DeJean promises those skeptical of touring productions that the SoCal engagement is no different from what fans would see on Broadway.

“This is the exact same show,” DeJean says. “The biggest misconception about touring productions is that the talent comes from the bottom of the barrel, which isn't true. Eighty percent of this cast has been in the Broadway cast. The sets are the same, nothing's been cut – there really are no differences.”

After nine years of alternating characters in 'Chicago', DeJean says she is honored to finally be starring as Roxie in the national production. The Broadway actress says she finds the role to be very therapeutic, and that she goes to bed every night feeling good since she gets to purge her emotions onstage nightly.

“Every night I get to go through this full spectrum of emotions,” she says. “It's really like a therapy session. I get to let everything out I had hiding inside. Roxie just encompasses so many human traits; she's the only one in the cast audiences really get to know.”

Unlike several other Broadway-musicals-turned-feature-films, Chicago was that rare musical that managed to be a success at the box office, and thus resulted in various other Broadway musicals taking their stab at the big screen. While the feature film versions of Rent and The Producers didn't fare as well as Chicago, DeJean says the Broadway community is still grateful for Hollywood's recent trend to try to bring musicals to the big screen.

“I'll admit, the cast of ‘Chicago' was nervous when the film first came out,” DeJean states. “We knew it really could go either way. People could either love the movie so much they'd figure why see the Broadway version when the theatrical version was so good, or they could hate it so much they'd never want to see ‘Chicago' again. We were blessed that everything worked out for the best.

These feature films are bringing a whole new demographic to Broadway, people are still flocking in because they love the movie so much and they want to see how it's done live. Really, I think we're working hand-in-hand with Hollywood.”

And that's a relationship DeJean hopes will continue in the future. With her 'Chicago' contract ending Oct. 29, DeJean admits that she's looking to move away from the musical theater scene sometime soon. At a time when many Hollywood A-listers and pop stars are making their musical theater debuts (including 'Chicago's' own Ashlee Simpson and Usher), the Broadway star says she's hoping to make her big screen debut, and would love to break into Hollywood with a role in another musical-turned-movie. While her future may be in Tinsel Town, DeJean knows that no matter what, her heart will always be on Broadway.

“Musical theater is the love of my life,” she concludes. “I know nothing will ever be more fulfilling.”