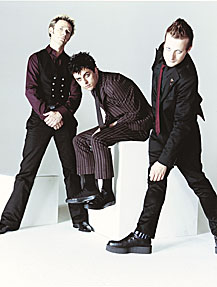 “We’re sort of in that higher bracket now of veteran bands that are a force,” says Tre Cool, drummer for pop-punk icons Green Day. “We’re serious. We’ve been around for 10 years. We’re tried and true. We’ve had big records and big tours for 10 years – it’s not like we had one hit or something.”

Sound cocky? Maybe so, but it has been 10 years since Green Day first broke out with their major label debut, Dookie, selling over 11 million copies internationally and spawning other multi- platinum nuggets such as Insomniac and Nimrod. With songs that made punk rock catchy such as “Welcome to Paradise,” tied with memorable melodies such as “Time of Your Life (Good Riddance),” just consider “cocky” a badge of honor.

Yet even when Cool talks up his band, which includes charismatic frontman Billie Joe Armstrong and bassist Mike Dirnt, the words come out with such boyish enthusiasm, it’s hard not to crack a smile.

“You know bands that we meet – like the Clash, Van Halen, R.E.M., U2 and different bands that we respect – have given us props saying that they like our record,” he says. “Basically, welcome to the club, you know?”

Cool then blurts out, “It’s like, ‘Dude! Van Halen listens to us!’”

Having debuted on the Billboard charts and around the world at number one, Green Day’s American Idiot has come to represent music of our time. Mixing political statements and heartfelt lyrics with fast, upbeat rhythms, the album includes a unique cast of characters such as “St. Jimmy” and “Whatsername.” Consequently, the album’s title is dedicated to Whatshisname – President George W. Bush.

St. Jimmy, known as the Patron Saint of Denial, is described by Cool.

“He’s the artful dodger. All the guys want to be him and all the girls want to do him. He’s cool as fuck, but he’s a bad idea. Maybe [someone] with a destructive tact.”

Sound a little like he’s talking about himself, maybe? Cool gets psyched when he shares a story of his own destructive tact while on tour.

“There was this guy in this English band that I won’t name. He was staying in the room next to us,” starts Cool. “We were partying, and he walked in and was like, ‘Can you guys be quiet? I have a gig tomorrow.’ I was like, ‘Excuse me? Fuck off!’

“So I put his band on my stereo really loud – the song that they don’t really like to play anymore because they’re too cool for that song – and then I got some rope. I tied a slipknot around his doorknob so that in the morning when he got up to do his gig at Coachella he couldn’t get out of his room. He had to call security to let him out!”

After Cool’s mischievous laughter subsides, he does get serious when talking about politics and Green Day’s public denouncement of our current presidential regime. Having contributed to Rock Against Bush, Vol. 2 and even starting a petition against the war in Iraq, the band has been anything but silent about their beliefs.

“We’re anti-violence, anti-war – that’s just straight up,” says Cool. “I don’t care if you’re the United States, if you’re China, Israel, or whoever, if there’s somebody that thinks they can solve a problem by dropping a bomb or shooting a gun, then I disagree.”

Yet being the new socio-political band on the block, they’re surely asking for a fight, right?

“There was a radio station in Chicago that refused to play ‘American Idiot.’ The guy said, ‘We do have a redneck agenda,” reveals Cool, referring to the lyrics in the song. “But that’s great,” he says. “It’s like, we’re all over that.”

Although Election Day was a dark day for the boys of Green Day, the future still looks bright for this not-so-green-anymore band. And with great success, comes (again) that well deserved cockiness.

“We’re not just a pop-punk band, we’re the guys who started that genre,” says Cool with a gleeful grin. “We still lead the way. We’re the best Green Day band in the world!”

American Idiot is currently available. Green Day will be performing with New Found Glory and Sugarcult on Nov. 23 at the Long Beach Arena in Long Beach. For more information, visit www.greenday.com.