Massive Attack: Presents a New Face at Every Turn 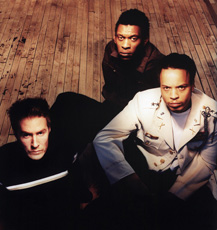 Robert “3D” Del Naja, one-half of the creative nexis of innovative British trip-hop act Massive Attack, is spot-on when he says during a telephone interview from Las Vegas, “We're the only band that does what we do.”

But while many have been thrilled by what Massive Attack is doing on its first U.S. tour in eight years, some have been puzzled. Five musicians and three alternating vocalists (including former Cocteau Twins singer Elizabeth Fraser) perform the music, with Naja and his partner, Grant “Daddy G” Marshall, joining in – but not always.

“It's a band doing Massive Attack covers, rendering them large and lifelike for a crowd,” wrote a Dallas Morning News reviewer last month.

There are times when no one performing on stage is actually a member of Massive Attack. “On paper it might sound perilously like ‘The Massive Attack Revue,'” noted a reviewer in the Los Angeles Times .

While the Dallas reviewer liked what he saw ­ he called the lighting “the best part” of the concert ­ he was lukewarm about what he heard. The Times writer, however, found the 100-minute show at the Hollywood Bowl “remarkably dynamic and involving.”

Weighing in on the real band vs. cover band debate, which he calls “a thorn under my skin,” Del Naja says, “Some rock 'n' roll writers don't quite get what we're doing. They expect something else, maybe what they're used to. In the last 15 years, we've played a hundred festivals, and every time, only one or two or three bands is doing something different. ... We've always tried to do something different to our music – change the arrangements, change the instruments, refresh it, convey something new, make it exciting.

“I'm on stage a lot of the time,” he adds, “messing around, putting on layers of stuff. ... In our shows, rather than four or five people with clearly defined roles, it's different people coming in and out of focus. It's more like ‘Cats.'”

Del Naja explains why in concert Massive Attack uses several featured performers and a D-Show desk, a digital device that allows Del Naja to “dial up” effects almost impossible to reproduce outside a recording studio. “Otherwise [concertgoers] may not get to hear half the detail of the [recorded] tracks,” he says. “If you're not going to play it like you wrote it, you're actually covering it badly.”

In April, Massive Attack released a greatest hits compilation, Collected , that culled the essential tracks from the Bristol band's four studio albums since 1991 and proves beyond doubt just how pace-setting the group's moody, hypnotic blend of hip-hop, soul, reggae dub and samples has been.

Del Naja and Marshall are working on Massive Attack's next record, tentatively titled Weather Underground , the first since 100th Window in 2003. Del Naja won't say much about it, except, “You don't follow up where you left off. You're always trying to find a new instrument or rhythm, trying desperately to find the correct alchemy to build a new Gothic soul kind of sound.”